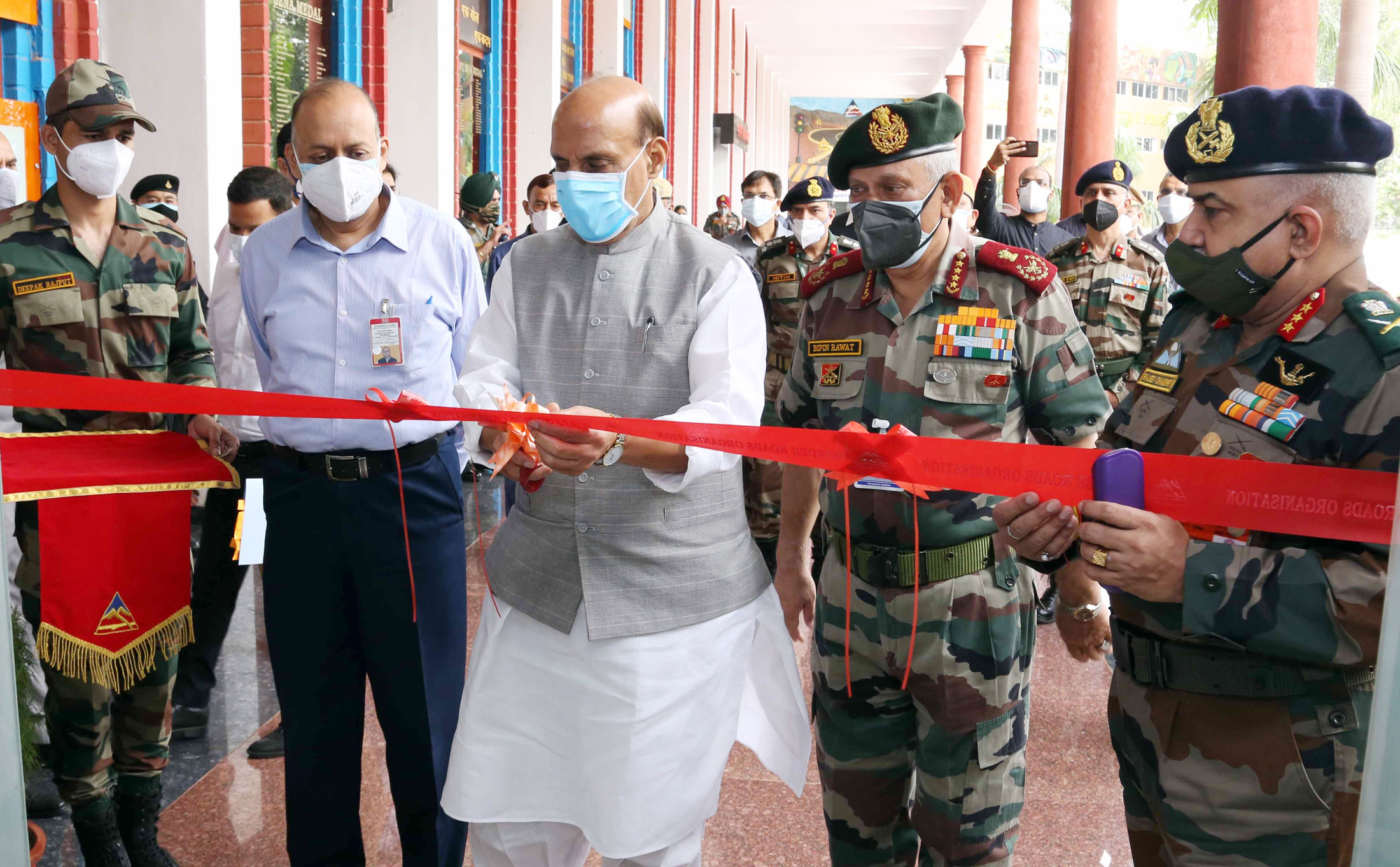 Raksha Mantri Shri Rajnath Singh dedicated to the nation two Centres of Excellence established by Border Roads Organisation (BRO) at Seema Sadak Bhawan in New Delhi, on June 11, 2021. These Centres have been established to achieve excellence in road safety as well as foster growth in construction of roads, bridges, air fields and tunnels. The Centre of Excellence for Road Safety & Awareness (CoERSA) aims to create awareness about road safety through analysis sharing of road accidents and suggesting methods to save precious lives. The Centre of Excellence for Roads, Bridges, Air Fields and Tunnels (CoERBAT) focuses on institutionalising the knowledge gained over the years in development of almost 60,000 kilometres of roads, 56,000 metres of bridges, 19 airfields and four tunnels in the eastern and north-western part of the country.

Speaking on the occasion, Shri Rajnath Singh appreciated the efforts of BRO in establishing the Centres of Excellence, expressing confidence that they will play a pivotal role in saving precious lives. Terming road accidents as a silent pandemic that claims approx. 1.5 lakh lives every year, the Raksha Mantri stated that the Government has taken a number of initiatives such as National Road Safety Policy, Motor Vehicle Act 2020 and identification of black spots on national highways to tackle the problem and the setting up of these Centres is another step in that direction.

The Raksha Mantri lauded the crucial role played by BRO in the progress of the nation since its inception by building roads, tunnels and other infrastructure in remote areas. He praised the efforts of BRO for working tirelessly in tough weather conditions to increase connectivity in border areas, especially during the COVID-19 pandemic. Describing connectivity as an essential component of a nation’s progress, he said BRO is catering to the needs of the Armed Forces as well as working towards the socio-economic development of the border areas. He made special mention of the recent achievements of BRO, including state-of-the-art construction of ‘Atal Tunnel, Rohtang’, Kailash Mansarovar Road and Zojila pass. He also appreciated BRO for raising awareness about road safety through innovative slogans and signboards.

Shri Rajnath Singh also listed out various measures taken by the Government for the development of BRO. These include an increase in the budget of BRO, approval of special high-altitude clothing for the personnel as well as cadre review to boost the morale of the organisation. He assured BRO of continued support of the Ministry of Defence, saying that the Government remains committed to the progress of the far-flung areas of the country. He also remembered the BRO personnel who laid down their lives in the service of the nation.

During the event, the Raksha Mantri also launched four software developed to optimise the work efficiency of BRO personnel, their HR management, recruitment management, enrolment and works management. The BRO has created the software to reduce paperwork, with a focus on minimising the carbon footprint. Shri Rajnath Singh termed the development of the software as a great example of ‘Self-reliant India’ and ‘Digital India’ campaigns. He stated that the software will further improve the efficiency of the organisation, modernise it and save time.

The first ever Solo Woman Motorcycle Expedition by Ms Kanchan Ugursandi to Umling La Pass, Ladakh and back was also flagged off on the occasion. The Raksha Mantri extended his best wishes to Ms Kanchan Ugursandi and expressed confidence that she will come out with flying colours and complete the task by setting new records.

Earlier, DG Border Roads Lt Gen Rajeev Chaudhry briefed Shri Rajnath Singh on the initiatives and achievements of BRO in recent years. He informed the Raksha Mantri about the ongoing and future projects, with focus on AatmaNirbhar Bharat Abhiyaan envisioned by Prime Minister Shri Narendra Modi. He also informed Raksha Mantri on the awareness campaigns being carried out by BRO related to COVID-19 and Azadi ka Amrut Mahotsav in far-flung areas. The DG Border Roads said BRO remains committed towards serving the nation and would bring all necessary changes to enhance the efficiency of the organisation.

Chief of Defence Staff General Bipin Rawat and Defence Secretary Dr Ajay Kumar were among the dignitaries present on the occasion.