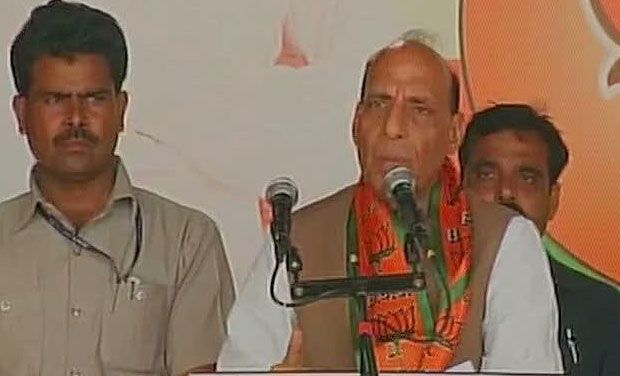 Yavatmal: Taking potshots at Congress and NCP in Maharashtra, Union Home Minister Rajnath Singh on Sunday urged the people to vote for the Bharatiya Janata Party (BJP) in the upcoming assembly polls for prosperity and progress.

Addressing an election rally in Yavatmal, Rajnath thanked the people for helping the BJP form government at the Centre with thumping majority.

“I have come here to appeal to you to vote for the BJP during the assembly elections so that my party forms government in Maharashtra like it did at the Centre after the Lok Sabha elections,” said Rajnath.

The Home Minister said the Congress and NCP have been given ample time but both parties have failed to live up to the expectations of people.

“Congress ruled this country for over 60 years, even Maharashtra has been ruled by Congress or by Congress-NCP for ample time. They have been given more than enough time to build a nation. But India is still counted among the poor nations,” said Rajnath.

“I want to ask Congress, I want to ask NCP that how much time is needed to make India a prosperous nation. The people of India want to know this,” he added.

Rajnath further said, “We have no shortage of natural resources, but still we are lagging behind, what is the reason? I want to ask this to the Congress.”

“I am aware of the problems of this region, there are around 1500 cases of atrocities on people registered here. If the BJP forms the government in Maharashtra, then there will be no atrocities, nobody would dare to indulge in violence,” he added.

The election for 288-member Maharashtra Assembly is scheduled to be held on October 15 while the counting of votes will take place on October 19.