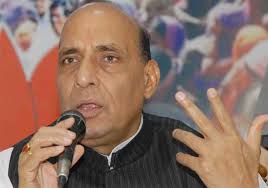 Party Chief Rajnath Singh said it was Congress and its governments that have destroyed the social and communal harmony in the country.

He said BJP has pursued the path of harmony and positive secularism, and it Congress rather than BJP that should apologize.

Singh on Wednesday also questioned the Congress-led UPA government’s move bring in ordinances to strengthen anti-graft laws ahead of the Lok Sabha elections.

“The Congress did not act when scams were happening everywhere — on the earth, in the skies and beneath the earth. All of a sudden the party is showing false commitment towards eliminating corruption,” he told a gathering of BJP workers in Doddaballapur, 40km from Bangalore.

Rajnath questioned the timing of the ordinances for four anti-graft bills before the Election Commission announces Lok Sabha polls schedule.

The BJP president said he would lead the party’s delegation to the President urging him not to sign the ordinances.

He tried to woo Muslims and said the BJP always followed a ‘pure’ secular culture. “The Congress, like the British, follows the divide and rule policy. This has disturbed the secular fabric of the country,” he said.

The BJP president on Tuesday had sought to bridge trust deficit between his party and Muslims by saying that he was ready to apologize for any mistakes in the past. He urged the community to give the saffron outfit at least one chance.