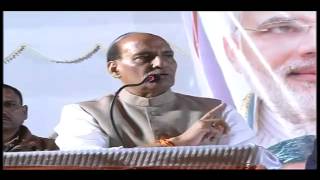 Stating that the country had witnessed a “dark decade” under the United Progressive Alliance regime, the Bharatiya Janata Party (BJP) Saturday said India’s “success story” would unfold with the BJP’s return.

“The Indian success story is not over, it is waiting for the BJP to come to power,” BJP president Rajnath Singh said, inaugurating the three-day national council meeting of his party here.

The caps read: “Modi for PM” and “BJP is the only alternate”, much alike the Aam Aadmi Party’s (AAP) caps.

The party president Saturday made a veiled reference to the Aam Aadmi Party (AAP), reflecting the concerns of India’s main opposition party.

The economic resolution adopted by the party’s national council – a body including all office bearers of the party – said the nation witnessed a “dark decade under the UPA regime”.

While the party appeared confident of coming to power and correcting the economy, the party president remarked that the Congress is using a “mask” to stop the BJP from coming to power, making an oblique reference to AAP.

“The Congress strategy as of now is to contain the BJP by hook or crook, and prevent it from getting majority or near majority. And for that, it has started spreading propaganda against the BJP with help from other forces,” Rajnath Singh said.

He said when BJP comes to power, its “good governance” would “put a question mark on Congress’ political relevance and its very existence”.

Talking of the motives of the Congress, the BJP president said: “The whole objective is to install a government at the centre that could be destabalised.” He said the through the politics of power, pelf or compromise, the Congress would attempt that.

The BJP president’s reference was to the formation of the government in Delhi, after the AAP emerged as the second-largest party, with support from Congress.

Arun Jaitley, presenting the economic resolution to the BJP national council, however, appeared more confident of victory: “It will be a big challenge for us and our allies to bring the economy back on track when we come in power,” he said.

The economic resolution, which was adopted by the council Saturday, said the UPA government inherited a robust economy from the National Democratic Alliance a decade ago, but failed to take advantage of it.

“Inflation is one of the biggest failures of this economist prime minister,” the resolution said.

Jaitley meanwhile blamed the dual decision centres of the UPA for the situation.

“In this government, the real power was with someone, and the government was run by someone else. How can a weak prime minister make the economy strong,” Jaitley said.

The resolution called corruption the “real killer”, and slammed the government for its “policy paralysis”.

The Congress also came under attack for the jibes against the BJP and its prime ministerial candidate, Narendra Modi.

At the All India Congress Committee meeting Friday, Aiyar had claimed that Modi would never be prime minister, but if he wanted to set up a tea stall, arrangements could be made for him.

He also took on Congress president Sonia Gandhi, for saying that the BJP had a “divisive ideology”.

“Sonia Gandhi said we want to divide India, it is her prime minister who said Muslims have first claim to resources in India. We do not divide people on the basis of religion,” he said.

He also slammed Prime Minister Manmohan Singh for his comment that Narendra Modi as prime minister would be “disastrous” for India, saying: “Did Manmohan Singh do anything for the country? Gujarat is prosperous under Modi, so will be the whole country”.

He said the UPA deserved no credit for the passage of the landmark Lokpal Bill in parliament.

“Anna Hazare deserves credit for the Lokpal Bill, and after him, BJP deserves the credit for pursuing it in parliament,” he said, adding that Rahul Gandhi was trying to take the credit.

The BJP national council will Sunday pass a political resolution.