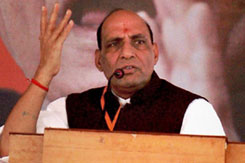 BJP president Rajnath Singh on Saturday said his party will bring a legislation to provide citizenship to Hindus who came to India from Bangladesh after 1971.

Talking to the media persons at Silchar airport at Kumbhirgram near here on Saturday, Rajnath added that it’s the responsibility of BJP to protect the Hindus who come to India either from Bangladesh or Pakistan who feel unsafe on their countries. “BJP will bring a legislation to grant citizenship to Hindus from the other side of the border who have taken refuge in India,” he said.

The BJP president, who was on his way back to New Delhi after addressing an election rally at Vairengte in Mizoram near Assam border, criticized Assam speaker Pranab Gogoi’s statement that Assam is a dumping ground of refugees of erstwhile East Pakistan. “It’s the responsibility of Indian authorities to protect the Hindus who are victims of Partition. BJP feels for them and will do the needful to protect them if voted to power in the general election to be held in 2014”, he added.

Pranab Gogoi had said Assam was compelled by the then Union government to take the entire burden of the refugees instead of sharing it with states like Bengal and Odisha.

The BJP national president criticized the Congress-led government in Mizoram for its failure to ensure industrialization, development and welfare of the tiny state despite its high literacy rate. “People of Mizoram and the north-east as a whole cry for generation of employment opportunities and job creation. The region calls for inclusive growth. However, Congress governments have failed to do so over the years”, said the BJP president.