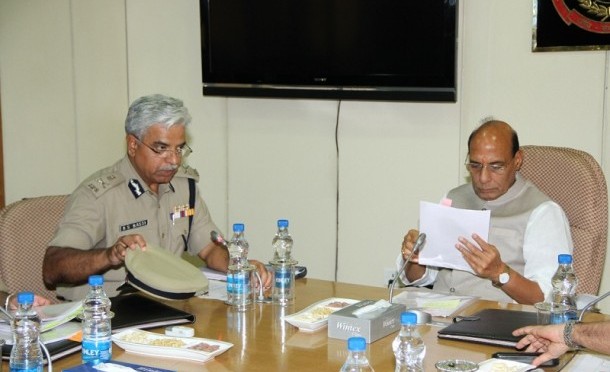 Union Home Minister Rajnath Singh today visited the Delhi police headquarters for the first time after taking charge and discussed with top officials women’s security and other key law and order issues while assuring the force of all help in modernisation to make it more effective. “I discussed with the senior police officials about how we can modernise the force to tackle the law and order problems in the national capital,” Singh told reporters outside Delhi Police Headquarters (PHQ) at ITO here. Singh arrived at the police headquarters around noon and stayed for nearly two hours. He was briefed about the functioning of the force and was given a tour of Delhi Police’s central command room and the control room. Delhi Police Commissioner B S Bassi gave a presentation on some of the key steps introduced by the police in the recent past and also apprised the Home Minister about some of the achievements of the force. Women security was one of the issues emphasised upon during the presentation which also included administrative, security and traffic matters in the national capital. Issues like financial approval, manpower enhancement and clearance for some of the projects which are pending with the ministry were touched upon while internal issues of the force and steps needed to make it more effective and modern were also discussed. “We have given a presentation to the Home Minister in which we apprised him of Delhi’s crime situation and some of the things we have done in the past in detail. “We have briefed him about the functioning of the Delhi Police and the Home Minister heard us patiently, understood the issues raised by us and then gave us guidance,” Bassi told reporters after Singh’s visit. Singh also went to the Command Room. “He saw the way our force functions and appreciated it and assured us that whatever will be needed to Delhi Police for its modernisation will be provided,” he said. “We also briefed him about some of the pending proposals and he assured us that they will be deeply studied and action will be taken soon,” said Bassi. Asked about whether women’s security was discussed, Bassi said that the Home Minister appreciated Delhi Police’s efforts in this connection and urged them to continue the good work with enthusiasm. According to a senior Delhi Police officer, the Home Minister had “encouraging words” for the force. Singh also had one-on-one discussion with some of the senior officials. Police force in Delhi – which is a Union territory – works under the administrative jurisdiction of the central government. (Source:PTI)