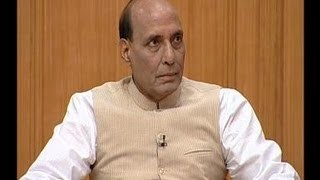 BJP president Rajnath Singh claims Narendra Modi is no longer an ‘untouchable’ in politics and restraint needs to be maintained in political discourse. Excerpts from an interview:

Do you think this election is polarised on communal lines?

Some of our rivals are desperately trying to achieve this. They are hurling abuses at the BJP and Narendra Modi to create some sort of polarisation. We will keep our focus on the issue of development.

Why then did Amit Shah asked people in riot-hit Muzaffarnagar to seek revenge?

His remarks have been wrongly interpreted. He just asked voters to bring about a change through ballot. What was wrong in that? Isn’t election an opportunity to vote out a non-performing government?

Is Modi also a polarising figure treated as an untouchable?

He is the most vilified politician in India. No other leader has been subjected to such a sustained and motivated campaign. But how can you call him untouchable? Today he is the PM candidate of the 28-party National Democratic alliance. The day Ram Vilas Paswan, who had quit NDA after the 2002 riots, returned, the untouchable tag on Modi was removed. Now, we have the TDP on our side.

Do you think the level of discourse during the elections has touched a new low?

Karnataka chief minister Siddaramaih recently called Modi a mass murderer. Do you expect an elected CM to use such words? The Congress-ruled states have a long history of riots, but BJP never used such words. A certain level of decency and restraint has to be maintained