No rethink on Modi as BJP’s prime ministerial candidate: Rajnath 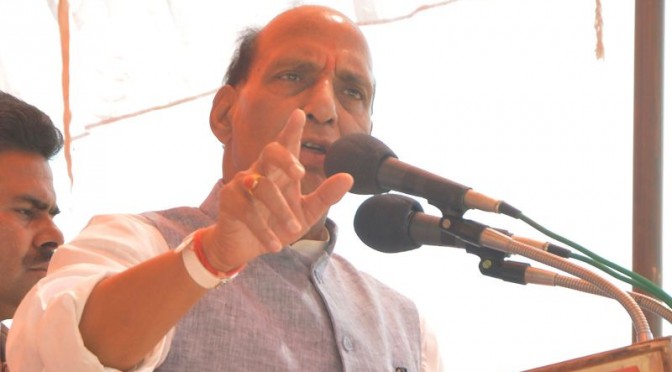 In a significant statement, BJP chief Rajnath Singh ruled out any rethink in Gujarat chief minister Narendra Modi as the party’s prime ministerial candidate saying Congress’s “dirty tricks” department is bound to target the leader. Singh’s remarks in Raipur came in the wake of reports on two websites that claimed illegal surveillance of a young woman had been ordered by former minister of state for home Amit Shah at the behest of his “saheb”, seen as a veiled reference to Modi. Dismissing allegations of illegal snooping against Modi, the BJP chief said, “There is no question of doing a rethink on our prime ministerial candidate even if a thousand baseless allegations of this kind are made against Narendra Modi.” Rejecting minister for communication and law Kapil Sibal’s view that BJP will be forced to reconsider its prime ministerial choice, Singh said he expected such reports to surface as the national election, due in 2014, drew closer. BJP had on Friday circulated a statement issued by the father of the woman concerned that he had himself approached Modi to seek surveillance. This was because she was in Ahmedabad to tend to her ailing mother and needed to commute at odd hours. Singh’s strong support for Modi is significant as he has backed the chief minister for the PM’s post in the face of opposition of party heavyweights like L K Advani. His solidarity will help Modi against those in the party who have argued that he will be a controversial nominee. The Gujarat CM has maintained a silence on the allegations. The allegations are bound to worsen the bad blood between Congress and the main Opposition with BJP having repeatedly accused the Centre of using the CBI to target Modi. “We had already said much earlier that we apprehend that the dirty tricks wing of the Congress will make such baseless allegations against Modi as the elections draw near,” Singh told reporters. Seeking to counter attack the Congress, the BJP chief said, “Instead of making these allegations, Congress should clarify as to who is its Prime Ministerial candidate.” He also wondered how the website got the call details when IPS officer G L Singhal, who did the illegal surveillance, had handed over the records to CBI. “Singhal had got bail with CBI’s support. He was also involved in the Tulsi Prajapati encounter but still got bail,” Singh said. The BJP president pointed out that the website itself has said it cannot make any claims about the authenticity of the CD. “The girl’s father has also given a statement that he had asked Modi, with whom he had family relations, for security for his daughter. The head of the government is responsible for ensuring the safety and security of the people. Modi was only performing his dharma,” Singh said.