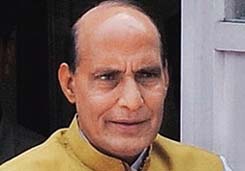 BJP President Rajnath Singh today accused Manmohan Singh of protecting the corrupt elements in his government. Addressing a huge rally here, the BJP leader also held the Congress-led UPA government responsible for rising food prices. “There is anger against the Congress” in the country for many reasons but mainly due to inflation and corruption, Rajnath Singh thundered. “In 2009, when it took power, the Congress promised to control inflation within 100 days. “Thousands of days have passed and nothing has happened. “The common people are suffering because of runaway high food prices… On the contrary, the NDA government of (Atal Bihari) Vajpayee controlled prices for (the) six years (it was in power),” Rajnath Singh said.