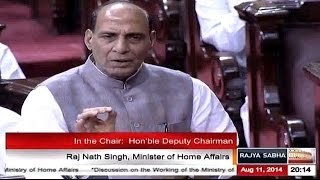 BJP president Rajnath Singh on Thursday announced the party’s alliance with Ram Vilas Paswan’s Lok Jan Shakti Party (LJP) in Bihar for the Lok Sabha elections, and promptly declared that the partnership would be “advantageous” for to National Democratic Alliance (NDA).

Pre-empting questions on Narendra Modi, Mr. Paswan, who had distanced himself from the NDA after the 2002 Gujarat riots, said the LJP had become part of the NDA and the alliance had declared Mr. Modi its prime ministerial candidate. “There is no need to ask about it.”

The return of Mr. Paswan is important for the BJP to show that Mr. Modi enjoys acceptability and can draw allies.

Under the seat-sharing arrangement, the LJP will put up seven candidates from Hajipur, Samastipur, Jamui, Munger, Vaishali, Nalanda and Khagaria. Exchanging bouquets and sweets, the leaders declared that they would jointly campaign in the State. Mr. Paswan said he would attend Mr. Modi’s rally in Muzaffarpur on March 3.