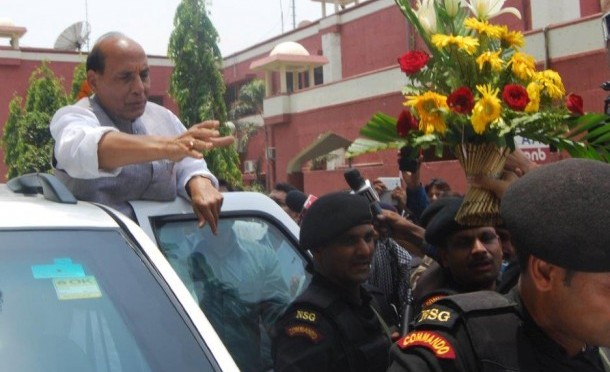 A comprehensive integrated action plan was required to solve problems like naxalism, separatism, terrorism and his ministry was working on it, Union Home Minister Rajnath Singh today said.

“Whether it’s naxalism, separatism or terrorism, a comprehensive integrated action plan is needed and my ministry has started work on it. We accept the challenge and based on this efforts will be made to take balanced action,” Rajnath said.

He said that efforts which were required to tackle big problems before the country was not taken in the past.

“The integrated action plan could not be chalked out. We have started work on it and we have faith to achieve success,” he said.

The Union Minister said that the party has decided to work as per the thinking of former Prime Minister Atal Bihari Vajpayee that a friend could be changed, but not a neighbour.

“After independence it was for the first time that heads of SAACRC countries were invited for swearing in ceremony. By doing this we have given a clear message to have a cordial relation with them. Normally it takes one to one and a half years. We have talks with the SAARC heads and they want to maintain good relationship with India,” he said.

Rajnath said that the people have given the BJP mandate and they have expectations as well.

“The person who has become the PM Narendra Modi has a dynamic and imaginative personality. I am sure that in the next five years the government will prove true on the expectations of the people,” he said.

The Union Minister said that the government was not celebrating as it was shocked with the untimely death of Gopinath Munde.

“He was a popular leader and we planned to project him as the Chief Minister in Maharashtra assembly elections,” he said.

Regarding development of his parliamentary constituency Lucknow, Rajnath said that an action plan would be chalked out in 100 days responsibility of which has been given to former vice-chairman of Lucknow Development Authority Diwaker Tripathi.

Earlier the Union Minister said that the newly elected NDA government was committed to rid the country of current problems, but the system which has paralysed could not be changed in one or two years and there was a need to give time for this.
“I want to assure that as far as security of the etire country is concerned then whatever the government is required to do, we will do that. All efforts will be made to rid the problems through which the country is passing,” Rajnath, who is on his first visit to his parliamentary constituency after being sworn in as Home Minister, said while addressing workers.
“But it is also true that we cannot do this work in one, one and a half or two years. The system has become so paralysed in the previous regime that it will take time to set it right. Give us time. You have seen that comparably BJP ruled states are doing better then others,” he added.
Rajnath expressed his gratitude to the people of Lucknow for making him victorious with huge margin.
“I express gratitude to the people and party workers. I express gratitude to youths, our mothers and sisters,” he said.
Earlier, the Union Minister was given a grand welcome on his arrival at Chaudhary Charan Singh airport here.
When asked about law and order situation in Uttar Pradesh, the Union Home Minister said he will not comment on any state at this point of time.
“My ministry has report of all the states, but I won’t comment on any state,” he said.
(Source:PTI)
Share this...