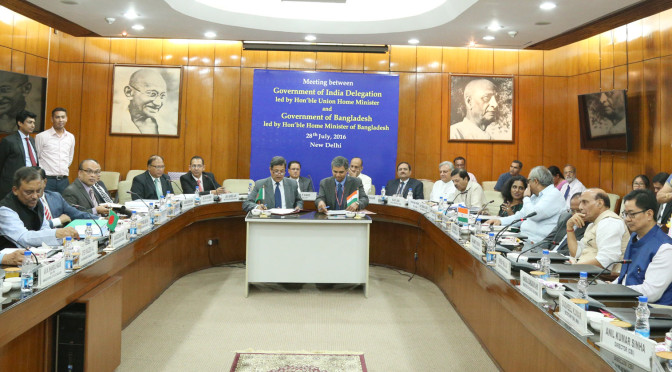 Shri Rajnath Singh condemned the horrific terrorist attacks in Dhaka in July, 2016 and conveyed his deepest condolences. He assured Bangladesh of India’s fullest support and cooperation in its fight against terrorism, fundamentalism and radicalism. Shri Rajnath Singh said that the two countries have to be vigilant at all times and channelise efforts to defeat the terrorism and ensure peace, security and prosperity between the two countries.

Shri Rajnath Singh recalled the excellent and friendly bilateral relations between India and Bangladesh and expressed deep satisfaction over the ratification of the India-Bangladesh Land Boundary Agreement of 1974 and its Protocol of 2011 last year. He also expressed satisfaction on the timely completion of all aspects of the Agreement, signing of 30 boundary strip maps pertaining to erstwhile adverse possessions and un-demarcated areas, completion of ground demarcation work, orderly movement of those enclave dwellers who chose to move to mainland India, completion of citizenship formalities of erstwhile enclave residents on both sides etc.

Recalling the historic visit by the Prime Minister of India, Shri Narendra Modi to Bangladesh in June 2015, the two Home Ministers agreed that the visit had infused a new dynamism in bilateral relations, widening the avenues for cooperation between the two countries. Both sides reaffirmed their resolve to strengthen this relationship further on the basis of friendship, trust and understanding for mutual benefit.

During the talks, the two countries recalled Prime Minister of Bangladesh, Ms Sheikh Hasina’s address in the wake of terrorist attacks in Bangladesh, emphasizing the need to be united in the fight against terrorism and to be vigilant against the nefarious designs of destabilising elements in society, and appreciated various counter terrorism measures undertaken by the Government of Bangladesh to fight extremist and radical elements. The two sides agreed to further strengthen the ongoing cooperation between the security and investigative agencies of the two countries through a programme of training, capacity building, information exchanges, etc.

Both Home Ministers agreed on the need to immediately operationalise the Agreement on Combating Terrorism and Organized Crime and Illicit Drug Trafficking. They expressed satisfaction over the signing of an addendum to the Bilateral Extradition Treaty of 2013 to further streamline the Treaty and to make it more effective. They also agreed on the necessity of signing a Repatriation Treaty to simplify and expedite the procedure of repatriation of each other’s nationals. Both sides also agreed to undertake urgent action for the repatriation of released prisoners and victims of human trafficking.

India and Bangladesh emphasized the need for speedy operationalization of three bilateral MoUs, namely, MoU between Indian Coast Guard and Bangladesh Coast Guard for the Establishment of Collaborative Relationship to Combat Transnational Illegal Activities at Sea and Develop Regional Cooperation; MoU to Prevent and Counter Smuggling and Circulation of Fake Currency Notes; MoU on Bilateral Cooperation for Prevention of Human Trafficking especially Trafficking in Women and Children; Rescue, Recovery, Repatriation and Reintegration of Victims of Trafficking signed during the visit of the Prime Minister of India to Bangladesh in June 2015.

Both sides emphasized the importance of effective implementation of the Coordinated Border Management Plan (CBMP) to enhance cooperation between the border guarding forces of the two countries and to enable them to better monitor the identified vulnerable areas with a view to preventing criminal activities, irregular movement, acts of violence and loss of lives along the border areas. Both Ministers expressed satisfaction at the finalization of Standard Operating Procedures (SOPs) for allowing usage of Indian border roads for the construction and maintenance of Border Out Posts (BOPs) of Border Guards Bangladesh (BGB) as well as the use of Indian medical facilities in difficult areas along the border by BGB personnel deployed in the area.

The two countries expressed satisfaction at the regular interaction of different bilateral mechanisms including Home Secretary level talks, BSF-BGB DG level Conference, DG level meetings between Indian and Bangladesh Coast Guards, DG level meetings of the Narcotics Control Agencies of India and Bangladesh and noted that these regular exchanges helped to enhance understanding and resolve issues to mutual satisfaction. India and Bangladesh were satisfied that regular meetings between District Deputy Commissioners and District Magistrates of border districts would facilitate resolution of issues pertaining to the border areas of both countries.