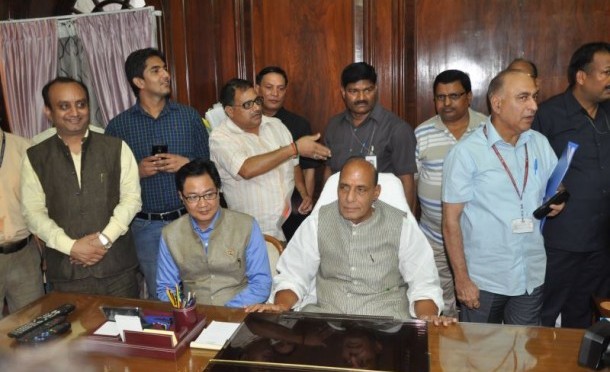 In order to better equip police and paramilitary forces in the country, the Union Home Ministry has decided to seek doubling of the budgetary allocation for their modernisation.

During the meeting, a ministry statement said, Singh directed his officials to prepare a proposal for doubling of the Rs 1,500 crore budget granted for police modernisation during the current financial year.

Singh, who also reviewed various other issues pertaining to security forces, directed his officials to ensure that the best quality training and equipment are provided to the Central Armed Police Forces (CAPF) like CRPF, BSF, ITBP, CISF and the police personnel.

The Home Minister also directed the officials to pursue the proposal of raising 35 additional Indian Reserve Battalions (IRBs) to help and aid state governments in fighting the menace of Left Wing Extremism and insurgency, especially in North-Eastern states and Jammu and Kashmir.

The IRBs are raised on a pattern similar to the central paramilitary forces. The Minister also reviewed the raising plan along with the vacancy position. He emphasised that steps should be taken for time-bound raising and recruitment of these forces, the statement said.

“Some of the core challenges and issues like housing, enhancement of allowances for CAPFs especially in the LWE affected areas, rotational training in CAPFs because of the over stretching of the forces were also highlighted and discussed in the meeting,” the statement said.

Singh also directed that the ambitious Central Armed Police Forces Institute of Medical Sciences (CAPFIMS) should be completed in a time-bound manner and on priority.

The Rs 1,368-crore project, which involves setting up the first-ever Army patterned Research and Referral hospital and an AIIMS-like college to render tertiary and specialised treatment to paramilitary personnel and their families, was inaugurated by former Prime Minister Manmohan Singh in February this year.

He also asked the paramilitary forces to take up the issue of enhancing the number of scholarships to the wards of the CAPF personnel under the welfare schemes of Prime Minister’s Office.

During the meeting, issues related to police reforms and reports of police commissions were also discussed, the statement said. Minister of State for Home Kiren Rijiju was also present during the meet.