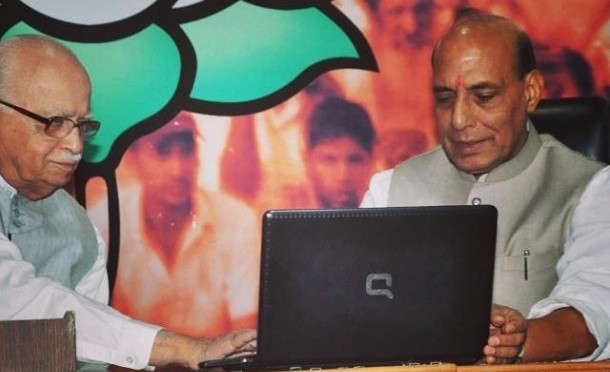 Giving credit to Prime Minister Narendra Modi and “good governance” in BJP-ruled states for the party’s electoral victory in the Lok Sabha elections, party president Rajnath Singh today said the kind of faith people reposed on it could not have been possible otherwise.

“Had it not been good governance provided by our party-run state governments and had we not have a popular leader like Narendra Modi then we would not have achieved this tremendous electoral results. Probably, the kind of faith people reposed on us could not have been possible,” Singh said.

The Home Minister was speaking at a function to pay tribute to Bhartiya Jana Sangh founder Syama Prasad Mookerjee on his birth anniversary and also launching the “join BJP” online membership drive.

Describing the people’s response towards the party in the elections as “very good”, he said, “After observing the performances of various BJP-run state governments, people realised that if any political party can give good governance and development-oriented government then it is BJP. So we got a clear majority at the Centre.”

Singh also mentioned the contribution of Atal Bihari Vajpayee and Advani and said “the duo have contributed to take BJP to this height.”
On the occasion, Singh also remembered veteran party leaders Kushabhau Thakre, Deen Dayal Upadhaya and others for sacrificing their lives for the party.
Paying tribute to Mookerjee on his birth anniversary, Singh said, “In independent India, if any political leader sacrificed his life for the unity of the country, I would say it was Mookerjee. Our party was founded by his guidance and principles set by him. Today, we are running the party and our political journey is based on his principles and ideology.”

On the party’s achievement in the recent elections, Singh said, “In Independent India no other party had become bigger than Congress and today BJP on its own has achieved this political stature.”

He also thanked the party’s IT cell for its significant role during the election campaigning.

Speaking on the occasion, Advani recalled the role played by Mookerjee in forming Bharatiya Jana Sangh.

“Mookerjee wanted to form a political party on the basis of Indian culture and tradition and which can be different from Congress and other parties,” he said.
The BJP veteran also mentioned about the role of RSS in the formation of Bharatiya Jana Sangh. “It was decided that RSS will not participate in direct election but will work for the party.”

Recalling the past, the former Deputy Prime Minister said, “The Bharatiya Jana Sangh party had contested the first election in 1952 and won three seats – two from Bengal and one from Rajasthan. Now, we have reached to this stage.”

On the online campaign, Singh said, “We decided that even after the formation of the government, the process of membership drive will continue.”

Singh further said “Whoever wants to join the party can become member through online membership drive.”