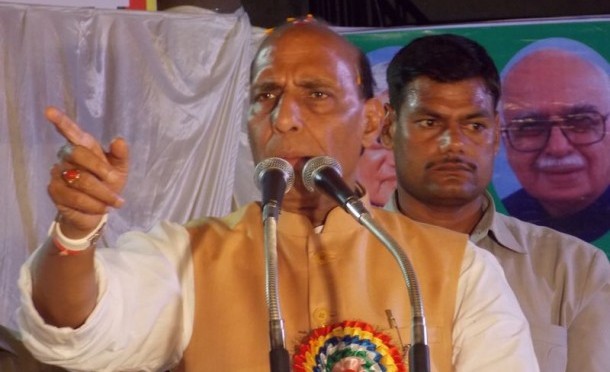 Give BJP a chance, Rajnath Singh to Muslims

BJP national president Rajnath Singh today appealed to Muslims to give the saffron party a chance while accusing political opponents of creating fear of it among the community members.

“Political opponents have been creating fear of BJP among Muslims. I appeal to Muslim brothers to come with BJP once and test it closely,” Rajnath said while addressing a gathering of people in Muslim dominated Khadra locality here.

“Then it will be decided that who is dividing you and who is showing the fear,” he added.

The BJP chief, who is contesting from Lucknow Lok Sabha seat, was accompanied by Chattisgarh chief minister Raman Singh and some prominent clerics.

“He (Raman Singh) has been elected as Chief Minister of Chhattisgarh three times. I want to ask whether Chattisgarh has divided Hindus and Muslims,” Rajnath said.

He appealed to Hindus and Muslims to vote unitedly and claimed that BJP would form the government at the Centre.

“BJP will get a clear majority and I am not saying this, this has been stated in national and international survey reports,” he claimed.