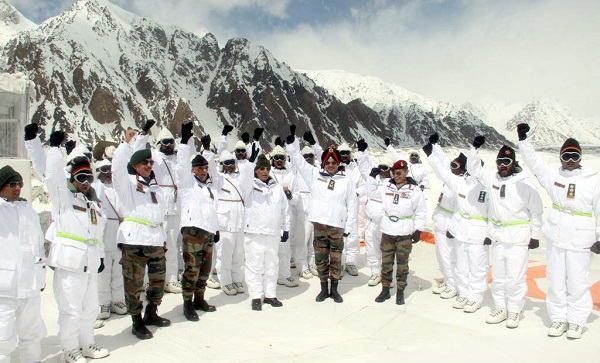 Two days after taking charge as defence minister, Rajnath Singh on Monday visited Siachen, the world’s highest battle field, and interacted with soldiers guarding the border beyond the heights of 12,000 ft.

Singh, who was accompanied by Army chief General Bipin Rawat and General Officer Commanding-in-Chief of Northern Command Ranbir Singh, saluted the valour of the soldiers and said he will personally send a thank you note to their parents for letting them serve the nation.

Our soldiers in Siachen are performing their duty with great courage and fortitude even in extreme conditions and t… https://t.co/rmr3p3KXwa&mdash; Rajnath Singh (@rajnathsingh) 1559550863000

“Our soldiers in Siachen are performing their duty with great courage and fortitude even in extreme conditions and treacherous terrain. I salute their vigour and valour,” the defence minister tweeted.
He also laid a wreath at the Siachen war memorial.

Paid tributes to the martyred soldiers who sacrificed their lives while serving in Siachen. More than 1100 soldie… https://t.co/YpHyNWjnNE&mdash; Rajnath Singh (@rajnathsingh) 1559551318000

“I am proud of all Army personnel serving in Siachen who are leaving no stone unturned to defend our motherland,” Rajnath Singh said.
“I am also proud of their parents who have sent their children to serve the nation by joining the armed forces. I will personally send a thank you note to them,” Singh said.
The Siachen Glacier in the Karakorum range is known as the highest militarised zone in the world where the soldiers have to battle frostbite and high winds. Avalanches and landslides are common at the glacier during the winters and temperatures can drop to as low as minus 60 degrees Celsius.

The Defence Minister said more than 1,100 soldiers have made the supreme sacrifice defending the Siachen Glacier.
“The nation will always remain indebted to their service and sacrifice,” he said.

In his first visit outside Delhi as defence minister, Singh also reviewed security preparedness in Siachen with top field commanders of the area.
Later, Singh arrived at the headquarters of Srinagar-based Chinar Corps at Badamibagh Cantonment here for a briefing on India’s preparedness to deal with any possible eventuality or misadventure by Pakistan.

Singh’s predecessors like Sharad Pawar, George Fernandes, Mulayam Singh Yadav and Nirmala Sitharaman too had visited Siachen.
Fernandes, as defence minister in the Atal Bihari Vajpayee-led NDA government, once sent two senior bureaucrats of his ministry to Siachen glacier when he came to know that they had held back a file on purchase of snow bikes for soldiers deployed there.

Credit – The Times Of India