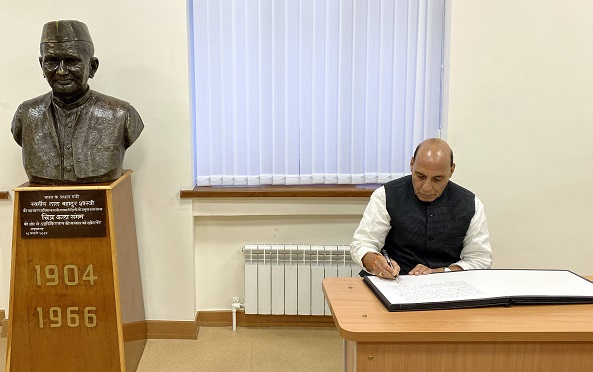 The SCO is an influential regional security grouping which is seen as a counterweight to Nato.

“Rajnath Singh will represent India in the meeting of Council of Heads of Government (CHG) of SCO in Tashkent on November 1-2,” the external affairs ministry said in a statement.

It will be the third CHG meeting of the SCO after India became the member of the grouping in 2017.

The last two CHG meetings were held in Sochi in Russia in 2017 and in Dushanbe in Tajikistan last year.

“India is actively engaged in various SCO cooperation activities/dialogue mechanisms in the region as well as to further develop multilateral cooperation within the SCO framework,” the MEA said.

The leaders participating in the meeting in Tashkent are expected to focus their discussions on the multilateral economic cooperation and economic development in the SCO region, the MEA said.

Singh will also have bilateral meetings on the sidelines of the SCO meet.

The SCO has emerged as one of largest trans-regional international organisations which accounts for almost 44 percent of the world population stretching from the Arctic Ocean to the Indian Ocean and from the Pacific Ocean to the Baltic Sea.

The aim of the SCO is to maintain peace, stability and security of the region.

India and Pakistan became full members of the SCO in 2017.

India’s membership was strongly pushed by Russia, while Pakistan’s entry into the grouping was backed by China.

India feels that as an SCO member, it will be able to play a major role in addressing the threat of terrorism in the region.

It is also keen on deepening its security-related cooperation with the SCO and its Regional Anti-Terrorism Structure (RATS) which specifically deals with issues relating to security and defence.

Credit- The Times Of India