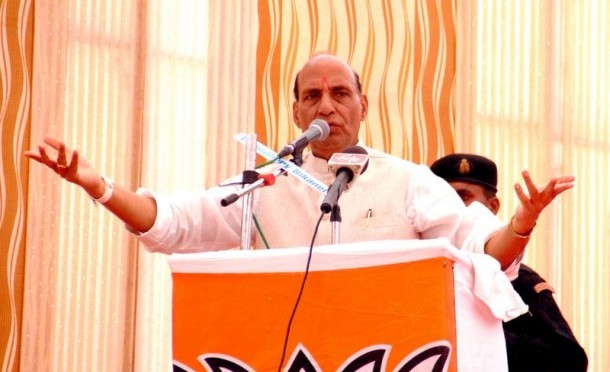 Congress will be routed across country: Rajnath

“The UPA regime has witnessed extreme levels of corruption, unemployment, lack of safety. Even after that, Rahul Gandhi expects no anger from common people,” said Singh, while addressing a poll rally in favour of the BJP candidate from Ajmer Lok Sabha constituency, Sanwar Lal Jat. Singh said that the people of the country were resilient and know how to express their anger.

“Coming Lok Sabha polls will see the Congress routed across the country. Right to vote is the strongest power bestowed to the people and they know how to utilize that power,” said Singh. He said that the UPA government witnessed scams worth Rs 5.5 lakh crore even after that the Congress leaders were expecting people to remain silent.

Singh once again recalled the incursions by the Chinese and the Pakistani soldiers and asked prime minister Manmohan Singh and Sonia Gandhi to see that the will power of the Indian jawans was not affected by their lenient stands.

“Country is going through an unprecedented state of crisis. People are in the grip of insecurity. People of this country need to be united and vote in favour of Narendra Modi and make him the next prime minister. “I haven’t seen any leader being criticized as much as Narendra Modi. Congress and the like-minded parties are united and they have launched concerted campaign against Modi and his personal life. No other leader has faced such a situation. It is high time, people should vote and support Modi and make sure that he forms a stable government,” he added.

He said that the Congress and its leaders were wary of Modi as they didn’t want that the governance is shifted from the Gandhi-Nehru family. “Congress leaders want only one family to rule the country. What is wrong if a person belonging to a poor family takes over as prime minister,” he said. He said that Modi, who was born to a poor mother and was tea vendor, will be an ideal person to emulate for the coming generations.

He recalled performance of the Atal Bihari Vajpayee-led NDA government and assured to start with where the NDA had left in 2004. Singh explained his own contributions to farmers as agriculture minister. “As minister, I had initiated the Krishi Aaamdani Bima Yojna under which crop of the farmer was ensured even before sowing was done. The insurance assessment was based on possible yield. We had initiated several other farmer friendly schemes and we promise results after coming back to power,” he added.

He said that the inflation and price rise had been integral part of the UPA for obvious reasons as they had poor economic policy other than corrupt system. “From 1999 to 2004, Atal Bihari Vajpayee managed to control inflation and price rise. Vajpayee-led spotless government and we need to work further on his vision,” said Singh.

He said that BJP candidate Sanwar Lal Jat is a local person and will be available for people. “Sanwar Lal has worked for common people and farmers for last 25 years and he has proved his dedication for development,” said Rajnath.