CM Should Ask for a CBI Probe into Mining Scam: Rajnath 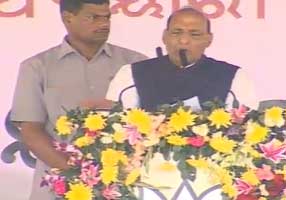 It is sad the BJD and the Congress have joined hands to prevent an investigation into the scam, he remarked while addressing the Vijay Sankalp Samabesh here.

He assailed the Centre for not tabling the full report (in five volumes) in the Parliament.“Only the first volume of the Shah commission report is tabled in the Parliament. The UPA Government is trying to hide the scam,” he said.

After the Shah Commission submitted its report, more evidences have come to the public domain about the Odisha mining scam. It is the duty of Chief Minister Naveen Patnaik to demand for a CBI probe, the BJP chief said.

Since Patnaik is trying to avoid further probe, Singh said BJP now demands a CBI inquiry into the scam as recommended by the commission in its report, he said.

Making a scathing attack on the Centre for not placing the Mines and Mineral (Development and Regulation) Bill in the last session of the Parliament, Singh said the Bill has provided for 26 per cent share in mining profits for the tribal and project affected people. He charged the Centre for deliberately withholding the Bill.

Singh also criticised the BJD Government for various other problems. In his address, State BJP president KV Singhdeo also demanded a CBI probe into the mining scam and sought to know from the Chief Minister as to why probe has not been conducted into the illegal mining activities of 91 out of 97 mining companies identified by the Shah commission.