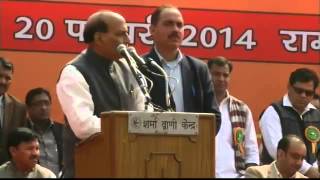 Speaking at ‘Khel Sansand’ organised by BJP, Singh said, “Despite having close to 65 per cent of youth population, it is very shameful that India could not win a single gold medal in London Olympics. We merely won 6 medals and celebrated.”

If the ruling parties and governments were keen for development of sports, India would have become superpower in the world sports,” he said.

“We have ample talent and abilities, but sports are considered as an entertainment and our youths are asked to focus on studies. BJP will change this,” he said.

If sports are linked to values as well as employment then the situation will improve, he said.

“BJP is preparing its vision document about its policy in favour of sports and sports persons for 2014 general election. It will be projected in our election manifesto,” he said.

Drawing a sport analogy, he said, “The party’s Prime Ministerial candidate Narendra Modi is playing on front foot whereas Congress and other rivals are on back foot. They are trying to throw a bouncer at BJP but every time we send their bouncers across the boundary.”