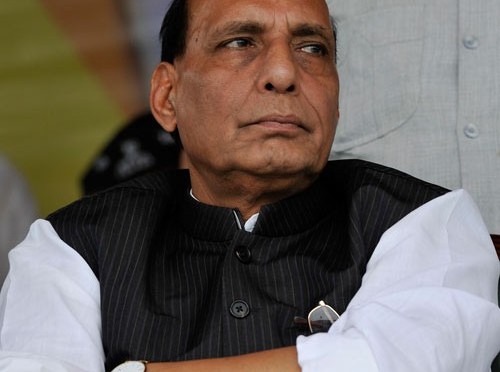 ‘BJP mainfesto focus is development, Ram Janmabhoomi is a matter of faith’

BJP president Rajnath Singh has made it clear that he is no ambitions to join the government if the BJP comes to power. In this interview, he has also indicated ceding his home turf if Narendra Modi decides to contest from Uttar Pradesh, and that the party is willing to hold back on contentious issues such as the demand to build a Ram mandir in Ayodhya — a bid to secure more allies through a broader governance agenda.

If the BJP forms the government, will you be part of it?

But do you expect your party to get the numbers to install Narendra Modi as Prime Minister?

At this stage, I am very confident that we can cross the magic figure of 272 on our own. Of course, we will still seek as many allies as possible to provide a stable government.

Some would say you are being over-optimistic about your numbers.

Please wait and see, we will win seats from states where we have never won before. In fact, I can say that barring the Northeast, we will win in all other states including southern states such as Andhra Pradesh and Kerala. Even in the Northeast, there will be surprises as we will certainly do better than expected there too.

Still, you admit that allies will be important. So have you worked out your alliances?

We are in the middle of that exercise and it should be all tied up in the next 20, 25 days. I don’t want to reveal much as discussions are on at the moment.

The general belief is that the BJP would find it more difficult to secure allies than, say, the Congress. What’s your message to potential allies?

This is for each party to decide. But more than a message, we have a principle that we will not demean our allies, we will share power with them and not reduce their importance regardless of their numbers in Parliament. We will give them due respect.

Would you signal this intent by dropping core BJP issues such as a Ram mandir in Ayodhya?

I have always maintained that the focus of our campaign and our manifesto will be on development, tackling corruption, inflation and issues affecting farmers. The Ram Janmabhoomi issue is a matter of faith, but what issues will finally get into the manifesto will be decided after discussions in our parliamentary board.

There is word out that Narendra Modi is keen to contest from Uttar Pradesh, the same state from where you have always contested. Your thoughts?

Modi ji is our prime ministerial candidate and he is welcome to contest from wherever he wants. But he has not yet made his

In which case, will you still contest from Uttar Pradesh?

I will stand from whichever constituency the party wants me to stand.