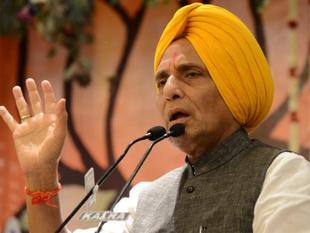 Government today said current measures are not enough and better steps are required at international borders to prevent smuggling of narcotics.

Home Minister Rajnath Singh informed the Lok Sabha that while smuggling of narcotics has been taking place for a long time, government keeps taking steps to check the trend.

The steps include fencing of border and flood lighting.

He said the present steps are not enough and still better measures are required to curb smuggling.

“We keep reviewing the arrangements like replacing old fencing and improving flood lights,” he said.

“The international borders mainly Indo-Bangladesh, Indo-Myanmar, Indo-Nepal and Indo-Bhutan are porous and prone to inflitratuion and smuggling activities,” he said.

As part of efforts to stem trans border crimes, effective domination of border is carried out through round the clock surveillance by patrol parties, creation of observation posts and use of speed boats on the riverine portions of international borders.

He said the issue of inflitration is also raised during meetings held at various levels.

Apart from aerial reconnaissance, 17 border outposts of Assam Rifles have been relocated from ‘depth areas’ closer to the Indo-Myanmar border recently.

He said the government is constanting using latest surveillance equipment to keep a tab on international borders.