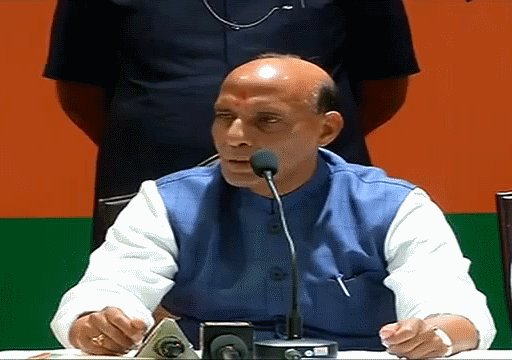 “On the one hand India is facing a series of ceasefire violations from Pakistan and on the other hand the UPA government’s response towards such acts of aggression has been submissive. After making a failed attempt to buy peace with Pakistan at New York, the UPA government has now allowed Pakistani Prime Minister Nawaz Sharif’s adviser Sartaj Aziz to meet and hold talks with Kashmiri separatist leaders in New Delhi. Why Mr Aziz is given this opportunity when Pakistan is committing acts of aggression in the state of Jammu and Kashmir?” BJP president Rajnath Singh said in a statement expressing his concern over “the manner in which the UPA government is operating its Pakistan policy”.

Singh termed allowing Aziz to hold talks with separatists in India as a “diplomatic blunder” and demanded the government to stop Aziz from it. “By allowing Mr Sartaj Aziz to hold talks with Kashmiri separatists the UPA government has committed another diplomatic blunder with serious costs to national security and national interest. The BJP demands that Aziz should be stopped from holding talks with Kashmiri separatists on Indian soil,” Rajnath Singh demanded reminding how Pakistan has recently tried to internationalise the Kashmir issue by raising it once again at the UN General Assembly meeting this year.