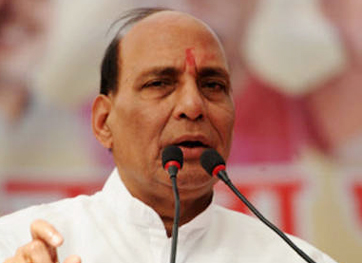 BJP national president Rajnath Singh has been keenly involved in assembly polls in Rajasthan. From selection of candidates to campaigning , he has been there. On Thursday, he campaigned in Marwar region and addressed rallies at three different places including Jalore , Shergarh (Jodhpur) and Baytoo (Barmer).

At Shergarh, barely 30km from Pokhran, the venue of nuclear tests, Singh was introduced by the party candidate as “son of soil” (son of a farmer). Singh was greeted by a crowd of more than 30,000 even though he reached there almost three hours late. The BJP president says that corruption and price rise were the two diseases for which Congress is responsible. He exhorted the crowd to make the nation “Congress-mukt” . He says that the quantum of money embezzled in various scams could have alleviated the country’s poverty.

During his visit to the above three places, he spoke to Akhilesh Kumar Singh. Excerpts…

Top leaders of the two national parties have thrown too much of muck in public. As party president, did you try to contain it?

Ethos (lokachar) is sacrosanct in public life and the way it has waned in politics in the recent past is ominous for loktantra (democracy ). I hold Congress responsible for degrading ethos in politics. The BJP practices moral politics and I keep insisting on respect for ethics in democracy. However, when parties like Congress use words like “chor” (thieves) and “jahreela” (poisonous), it does demoralize party workers if the BJP leaders don’t reply back. Still, we never encroach upon ethical boundaries. There could have been some exceptions among BJP leaders too but we are not habitual of it, unlike Congress leaders. And let me assure , we will exercise restraints.

Having indulged in exchange of barbs, don’t you think BJP has missed an opportunity to hit Congress hard, raising issues like corruption and price rise in a more vigorous way?

The BJP is seeking positive mandate. We don’t want to spread too much of negativism. However, we are duty bound to raise the problems being faced by common man. It is wrong to say that the BJP has not focused on failures of the Congress. Had it not been, Congress leaders would have suppressed the facts, and people would have been deprived of information about the loot of public funds. Just like documents regarding coal scam are missing, several such incidents would have been repeated. Pre-poll surveys have indicated that the BJP will win four out of five states. There are local issues but the corruption in the UPA government is certainly the most deciding factor.

BJP talks about problems, but is there any homework by the party about potential solutions ?

We are already working on a vision document entailing issues like economy, internal/external security and diplomatic ties with other countries. A committee in this direction has already been formed under the chairmanship of Nitin Gadkari. The document draft will be given final shape with the consent of the parliamentary board after which it will be presented before the people. The entire exercise will be accomplished before 2014 Lok Sabha polls. As party president, I have already expressed my desire to incorporate socioeconomic aspect of the country, for which an alternative economic model needs to be evolved. In nutshell, we aim to minimize economic disparity in the country.

The BJP keeps wooing Muslim community. But party fielded only seven candidates in the four states including Rajasthan , Madhya Pradesh, Chhattisgarh and Delhi?

We have repeatedly urged the Muslim community to test BJP at least once. The community remains poor and underprivileged even though Congress has ruled the country for 55 years. They must realize that Congress and a few regional parties have used them as a vote bank. We still believe that the community will one day realize and support us. We have no reservations about creating opportunities for the community. But we need options, we need association of more Muslim masses so that we share opportunities with them. Congress has created a fear psychosis among the community by repeatedly referring BJP as a communal party. Let me tell you, BJP ruled states have witnessed negligible communal tension or clashes compared to the ones ruled by the Congress.

Around 65% of the country’s population is below 35 years of age. Moreover, today’s youth is more assertive. How does party plan to associate the youth?

The youth will certainly determine the future politics of the country and no party can afford to run away from the issues of youth. Quality education and jobs are the key issues that the BJP will address on a priority basis. We shall stick to viable promises only. Our focus will be improving quality of education, giving more thrust on job-oriented education. Also we shall incorporate moral education . With the help of social organisation , we should introduce aptitude test and psychological profiling at the school level only. Creativity is paramount but values are equally important and we must look at judicious mix of both.

BJP has always opposed cult and dynasty in politics. But the party is practicing same now?

How many leaders from farming background have become Congress presidents? Look at the BJP, party leaders hail from different backgrounds and many of them come from average families. But just one family has led the Congress for almost 50 years and that one family has ruled the country for 40 years. As far as Narendra Modi is concerned, I have said that party has several times projected a senior leader as prime ministerial candidate. Modi is undoubtedly the most popular leader in the country at present and party must capitalise on his popularity.