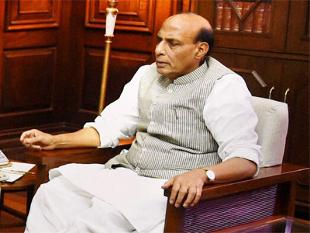 All options open for evacuation of Indians from Iraq: Rajnath Singh

Najaf,Karbala and Basra for the convenience of Indians nationals in Iraq.  Government today said it was looking into all options for safe evacuation of stranded Indians from strife-torn Iraq.

“We are looking into all options. All suggestions are on the table,” Home Minister Rajnath Singh told reporters here.

Singh was replying to a question whether India is planning “mass evacuation” of stranded Indians from Iraq.

“We are trying our best for the safety of every Indian in Iraq,” he said.

India has evacuated 17 more of its nationals from the conflict zone of Iraq with the help of local authorities taking the total number of those rescued so far to 34 and also advised its citizens to leave on voluntary basis by commercial means in view of the “fragile” security situation.

Ministry of External Affairs (MEA) spokesperson had yesterday said that government was also in constant touch with the 46 nurses who were in a hospital in Tikrit, another violence-affected city which also fell to the Sunni militant group ISIS (Islamic State of Iraq and Syria).

The Spokesperson also said the Indian Embassy in Baghdad will shortly open camp offices in Najaf, Karbala and Basra for the convenience of Indians nationals in Iraq.