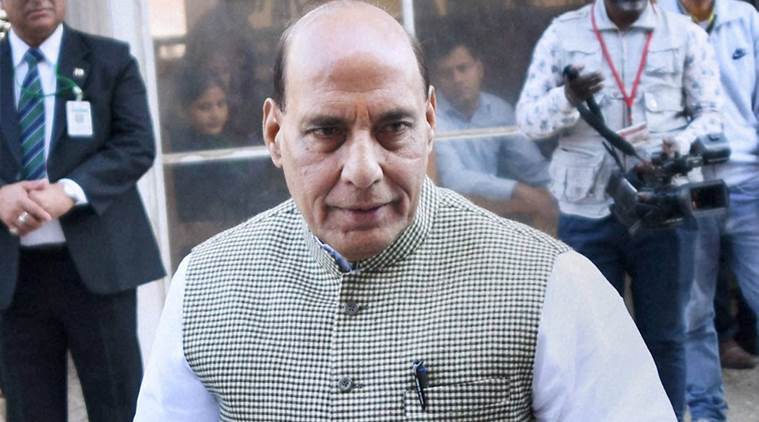 Rajnath Singh interview: ‘I am satisfied with whatever I am, I have no big ambition left in life’ || The Indian Express

So far, you have held 29 rallies in Uttar Pradesh. What is your assessment?

I think we will get an absolute majority. We are getting support from all kinds of voters. The main reason is that the BJP hasn’t lost its credibility. I think people believe that in comparison to other parties, the BJP provides better governance and development.

The BJP has given tickets to many leaders inducted from the SP, the BSP and the Congress. Will you agree this has upset the state unit?

Not at all. Some workers were upset for a moment but they have rejoined the campaign. In such a big party, such things do happen. See, you should accept one truth as well. Whether it’s Congress or Communist Party, all of them have faced a vertical division. But the BJP is the only party that has never been vertically divided.

You have been in public life since 1977, and seen UP all these decades. What is so special about it?

In UP, there is tremendous political awareness. UP’s voters take a decision after deeply thinking it through. When parties don’t fulfil promises, UP’s voters teach them a hard lesson. They don’t vote only on the basis of emotions; they take into account the ground realities too.

I am already the home minister. Second, our parliamentary board decided that we will not project a CM candidate. It’s part of our election strategy. We didn’t do it in other states either but still won those elections.

But UP is such a huge state and the BJP has a big leader like you available.

I am not a big leader.

You have been in electoral politics since 1977.

Nobody becomes a big leader just by fighting elections.

You have been a chief minister and are now Union home minister. Which is the bigger post?

Whatever responsibility the party gives me…

That question doesn’t hold much relevance for me.

I am asking only for your opinion. You have been in both posts.

In our party, a worker posted in a booth at the district level, too, is important. That’s my response. Whoever wants to rate these posts can do so. I won’t.

Which post gives the bigger chance to serve people?

How do you see your tenure as home minister?

I am trying sincerely to meet the challenges. I think Maoism has been reduced by 55 per cent. I have appealed to them to come to the negotiation table after laying down arms. They have not listened. I think we will need two, three years more to control it.

The home ministry took its time responding to the Naga blockade in Manipur.

This allegation is baseless. In a federal structure, we could not have gone directly. It’s the responsibility of the state government. We provided whatever was demanded. The state administration has to take the initiative. Whoever is levelling this allegation should say so openly, and I will respond to them.

What is the difference in the ground situation in Kashmir since you became home minister?

Is there any substantial change in the feeling of alienation? Has it reduced?

What is the Rajnath doctrine for Kashmir? Do you have a new experiment?

The coalition government of PDP and BJP is an experiment. We are ready to try all kinds of experiments.

Has it been successful?

I can say so far, there has been no problem.

But, what new have you done as home minister for a political solution in Kashmir?

We have done a lot. I’ll send you the details. The PM has given a special budget for young people. We have given employment to hundreds of young people.

Have you taken a final decision to stop use of pellet guns? A proposal has been made.

In fact, it was my suggestion to stop using pellet guns. We sent pawa (chilli-filled guns) but the experiment has not been successful. Security forces never aim to kill anyone but when someone throws stones or hits one fatally, then knowingly or unknowingly it hits insurgents. See, we certainly feel the pain whenever a security person dies or a Kashmiri common citizen dies.

You went with an ambitious programme to Pakistan. Who do you blame for the way your trip ended?

Ya to aap meethi-meethi baat kar ke chale ate to achcha wind up hota ( The visit would have wound up well if I had indulged only in sweet talk). Do tuk baat karni thi (I wanted to present the plain truth). End terrorism. Don’t promote terrorism. Don’t try to destabilise India. If you can’t control terrorism alone, then take India’s help, we are ready to help. What can I do if someone gets upset over what I said? Did I visit Pakistan only to eat ladoos? I went to Pakistan to present India’s views. I did that.

Do you think it was wise to make public the strikes across the LoC? The previous government never did.

Aisi baat Bharat main chipti kahan hai (Could such news have remained secret in India)? We got the information that after killing soldiers on our side terrorists had fled to the other side. Hum bhitar chale gaye, aur kya (We went running after them and entered that side, what else).

But, won’t you accept that there is no change on the ground, no gain, after making the strikes public? The attacks are continuing.

Not at all, I won’t accept. Hamari sena ke log mare jae to hum kya haath jodkar baithe rahe (If our Army men get killed, can we remain idle )? Should we do nothing? What is your view? Show us a solution.

Is it not a failure of strategy that after you made the strikes public, the attacks continue?

Not really. Ruk kar rahega. If not today, it will stop tomorrow. This won’t go on for long. Our prime minister has created diplomatic pressure. He has tried to bring on board the international community. To a large extent he has been successful, too. You have to understand that something going on for long will not end with one incident. We don’t expect it either.

Once your image was of a strong BJP leader of UP, backed by the farming community. As home minister now, you appear to be cultivating a hawkish image. See how you left Pakistan, see the way you are making election speeches.

Will you call it hawkish?

Yes. If not, what kind of image you are creating of yourself?

Main apni image banata, bigadta nahin hu ( I don’t make or mar my image). I speak the truth when I am with people; I speak the truth with conviction when I stand before people. The people will decide if I am a moderate or a hawk. As home minister I am working sincerely.

PM Narendra Modi is very interested in social media, Piyush Goel shows off apps, your government is into digital technology in a big way. But you, as home minister, are not that much into social media. You don’t carry an iPad, nor gadgets. Why?

My ministry and my team are fully abreast of matters.

But why are you not into social media?

Isn’t it necessary these days to become a mass leader and a popular leader?

Main jitna hu wo paryapta hai (I am satisfied with whatever I am). Hamari jindagi main koi bahut badi khwahish nahi rahi (I have no big ambition left in life). Jahan rahunga, jis roop main rahunga, jo bhi jimedari party degi uska nirvah karunga (Wherever I am , however I am, I will fulfil the responsibility assigned by the party).

Is the country being run as per the RSS’s ideas and BJP’s?

The country is being run very well under Modiji’s leadership. The RSS is a socio-cultural organisation. It doesn’t interfere in government. The government is run as per the ideas of the BJP. Modi is running it accordingly, and in better ways.

Your image is of a leader who speaks with restraint, but you must answer this question candidly. During elections, the BJP never gives tickets to Muslims.

In many state elections, we have given them tickets. It’s true that not as many people from the minorities have joined us as they should have. We are striving to instil confidence in the minorities. That will be our endeavour. Once they are ready, they too will get tickets. In UP, we could not make it possible. It’s possible that our state unit did not receive names who could win seats this time. It’s not true that we are reluctant to give tickets to Muslims. If there were suitable candidates, we would welcome it . We have given the opportunity whenever it has been possible. We have Shahnawazji, Mukhtar Abbas Naqvi ji, Arif ji, we had Sikander Bakht. See, we believe all social groups should be taken along. If not today, surely tomorrow we will succeed. These “secular” parties try to divide Hindus and Muslims.

The biggest criticism of your government is about the personality-based politics of Modi. It is said he is an autocrat who remains supreme from the top to level 10, with nobody at level 11. How do senior leaders like you feel about it?

He is not at all an autocrat. He works along with the party. He accepts the decisions of the party. Let some people disagree, but this is the truth. Many decisions I had taken as party president were not to his liking but he welcomed and accepted those.

The Citizenship (Amendment) Bill is before lawmakers. It proposes that Hindus, Sikhs or Jains from neighbouring countries may be allowed Indian citizenship, but not Muslims. Isn’t it discriminatory?

India was divided on the basis of religion. If minorities in Pakistan cannot continue living there and want to come to India, we have thought about their plight.

But when such a huge and secular country takes such a stand, will it not create a problem?

Not at all. Does that mean we accept all Pakistanis? I want to ask you, where should Hindus, Christians, Jains and Sikhs go? They once belonged to India. During Partition they stayed back. Now, some people are harassing them, making it impossible to live. Please see how the percentage of the minority population has gone down there while in India it has increased because we don’t disturb them. I want an answer from you. Where do the minorities of Pakistan, who once belonged to India, go to save their lives? Nobody has an answer to this question.