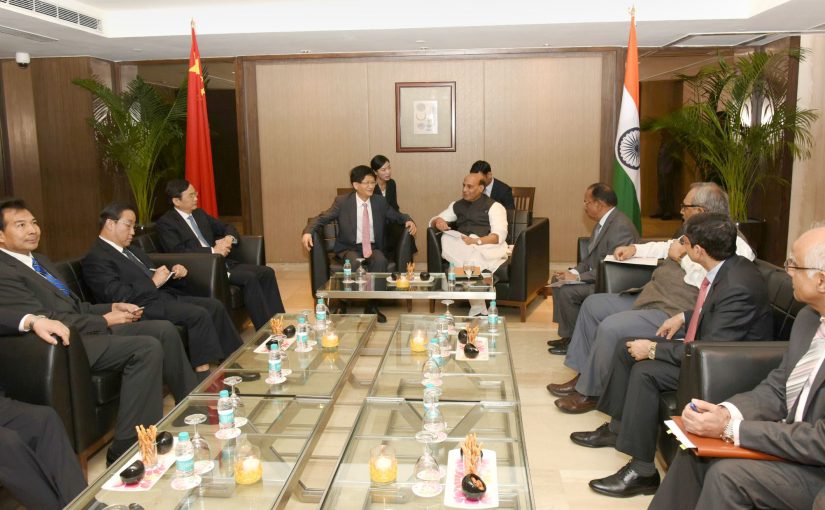 
Mr. Meng Jianzhu, Secretary of the Central Political and Legal Affairs Commission of the Communist Party of China met Prime Minister Shri Narendra Modi today. The Prime Minister welcomed the intensive exchange of high level visits between India and China over the last two years, and said that such visits contribute to building strategic understanding between the two countries. The Prime Minister fondly recalled his successful bilateral visit to China in May 2015, as well as his visit to Hangzhou in September 2016 to attend the G-20 Summit.

The two leaders discussed issues of mutual interest, including bilateral counter-terrorism cooperation. The Prime Minister said that terrorism poses the gravest threat to international peace and security, and welcomed increased cooperation between India and China on counter-terrorism related matters.

The Union Home Minister Shri Rajnath Singh had a bilateral meeting with Mr. Meng Jianzhu. Raising India’s concerns on terrorism, the Union Home Minister appealed the Chinese leader to support the international community’s efforts to designate as a dreaded terrorist the leader of the Jaish-e-Mohammed, a terrorist group already designated under the UN Resolution 1267. Underlining that Pakistan is patronizing and financing terrorist groups, Shri Rajnath Singh said that leaders of terrorist groups including JeM leader Masood Azhar, Lashkar-eTaiba leader Hafiz Saeed and Hizbul Mujahideen leader Salahuddin roam freely in Pakistan and preach terrorism. Even the Tehreek-e-Taliban and Lashkar-e-Jhangvi, blamed for terrorist attacks inside Pakistan, were financed and sponsored by the ISI, he added. Pointing out that there can be no good or bad terrorist, the Union Home Minister said terrorism is not one or another country’s problem, rather it is a threat to global peace and security.

Shri Rajnath Singh also solicited Beijing’s support to flush out ULFA leader Paresh Barua, who is believed to be taking refuge in the trijunction between India, Myanmar and China, to face trial in India for heinous crimes including murder. He also asked China to clamp down on arms smuggling to insurgent groups operating in India’s North-East.

Recalling his visit to China in November last year, the Union Home Minister expressed satisfaction that the two neighbours are holding their first high-level dialogue on Security Cooperation. Shri Rajnath Singh hoped India and China will be able to conclude negotiations on the Agreement on Security Cooperation soon. He proposed that the Agreement include cooperation on tackling transnational crimes and cyber crime. The Indian delegation included the Union Home Secretary Shri Rajiv Mehrishi and Senior Officials of the MHA.

The Chinese delegation led by the Vice-Minister of Public Security, Mr. Fu Zhenghua met the Indian delegation led by the Union Home Secretary Shri Rajiv Mehrishi. Both sides discussed the setting up of two Joint Working Groups to deal with the Fake Indian Currency Notes (FICN) and the setting up of a 24 x 7 hotline to exchange information. They also discussed issues relating to e-Visa, telecom fraud and security matters.