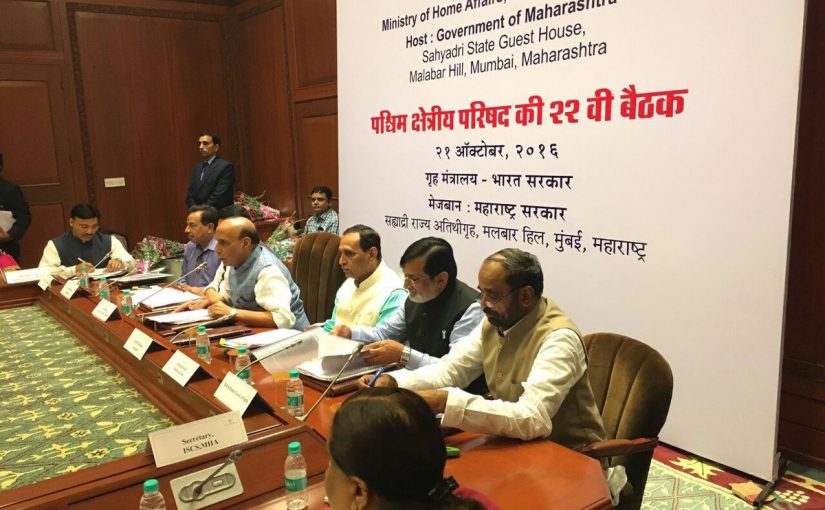 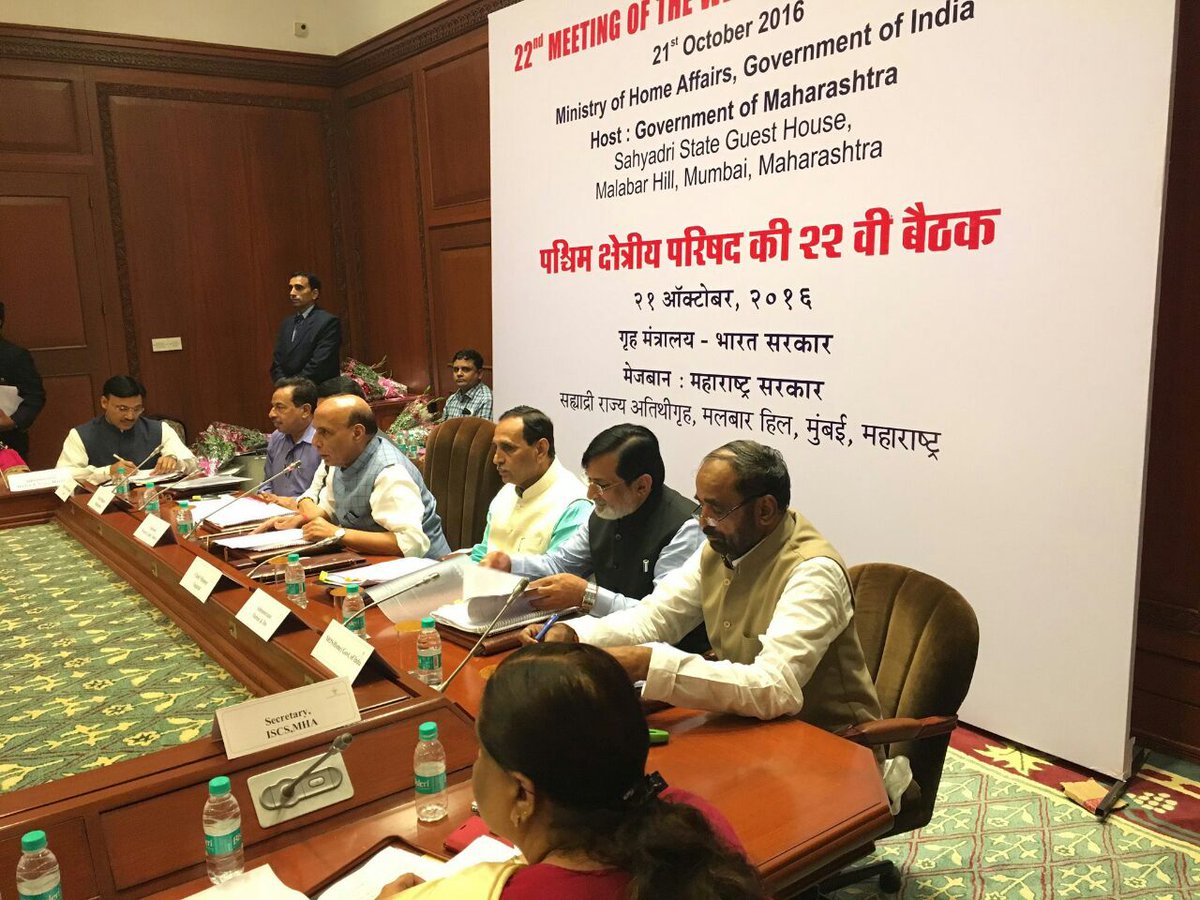 The 22nd meeting of the Western Zonal Council consisting of the States of Maharashtra, Gujarat, Goa and Union Territories of Daman & Diu and Dadra & Nagar Haveli was held at Mumbai today under the chairmanship of Shri Rajnath Singh, Union Home Minister. The meeting was attended by the Chief Ministers and Ministers of these States and Administrators of Union Territories as well as senior officers of Central and State Governments.

The Council reviewed the progress of implementation of the recommendations made in the last meeting. Thereafter, the Council took up issues which relate to coastal security, internal security, issuance of bio-metric identity cards to fishermen & issue of card readers, formulation of plans for countering terrorism, modernization of police force etc.

Other important issues discussed were Pradhan Mantri Awas Yojna (Urban) Mission, surplus lands of Central Government for ‘Housing for All : 2022’ and providing shelters to the urban homeless. Issues relating to checking pollution in Daman Ganga and Kolak river due to discharge of untreated effluents from Vapi industrial area were deliberated in detail. Appropriate measures to be adopted were also given. Issues relating to setting up of Regional Development Authority for development of infrastructure in the region, setting up of international museum of Indus – Valley civilization in Kutch District was also discussed.

Recently Inter-State Council meeting was also held under the Chairmanship of Hon’ble Prime Minister on 16.07.2016 after a long gap of 10 years. The Council also considered some of the important issues discussed in the meeting of Inter State Council held in July, 2016 under the Chairmanship of Hon’ble Prime Minister. These issues related to bringing back Indian fishermen (many of them belonging to Gujarat) languishing in Pakistan Jails, Internal Security, education and Aadhaar, Pollution control and environmental related issues were also discussed. Out of the 21 items discussed today most of the items were resolved in the meeting.

Five Zonal Councils (Northern, Western, Eastern, Central and Southern) were set up under the States Reorganization Act, 1956 to foster Inter-State co-operation and co-ordination among the States. The Zonal Councils are mandated to discuss and make recommendations on any matter of common interest in the field of economic and social planning, border disputes, linguistic minorities or inter-State transport etc. They are regional fora of cooperative endeavor for States linked with each other economically, politically and culturally. Being compact high level bodies, specially meant for looking after the interests of respective Zones, they are capable of focusing attention on specific issues taking into account regional factors, while keeping the national perspective in view.

With the active involvement and initiative of Union Home Minister, Shri Rajnath Singh, all the meetings of the five Zonal Councils (Eastern, Western and Southern and Central) were held last year 2015. In fact, other than 2015, it was only in the years 1972 and 2005 that the meetings of all the Zonal Councils could be held during a calendar year over the last 50 years. And of the 150 and odd items discussed last year, 50 to 60% items were resolved in the meetings.

Minister of State, Ministry of Home Affairs, Govt. of India, Shri Hansraj Ahir was also present in the meeting.