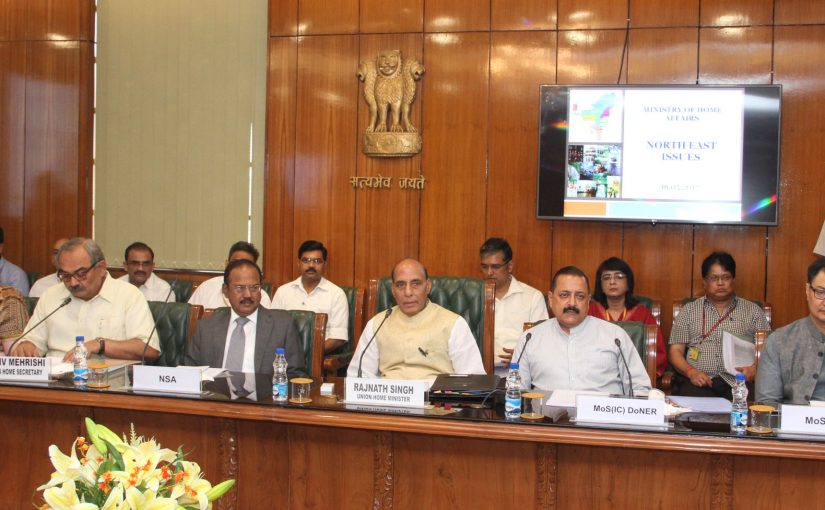 Home Minister complimented the States and Security Forces for the notable improvement in the security situation in the North East in recent years. He mentioned that the North East has got huge potential for development with rich human and natural resources. The Home Minister emphasised that for speedier development of the Region, improved security situation is extremely important.

Shri Rajnath Singh stated that since counter-insurgency operations are now not taking as much time of the Security Forces as before, the State Police forces need to focus on improving normal police functioning, better prosecution and conviction in criminal cases. There is a need to improve investigation by adding scientific tools and Forensic Science Laboratories. Presence of illegal arms needs to be reduced through a sustained organised campaign by State Police forces. The Home Minister stated that the Police also needs to take pre-emptive action to handle the threat of radicalisation and to handle cyber crimes. For this, well equipped and well trained police forces will be needed. Shri Rajnath Singh said that the issues of repatriation of Brus and citizenship to Chakmas and Hajongs need the active cooperation from the concerned State Governments.

On behalf of the States several issues were raised including issues of need for creation of proper detention centres for illegal migrants in Assam, need for central assistance to upgrade police infrastructure in border areas of the region, rehabilitation of surrendered militants, upgradation of police infrastructure and training to handle modern age crime such as cyber crime, drugs and radicalisation, better facilities to trade with neighbouring countries, disbursal of land compensation for fencing and border roads, the need for drastically improving telecommunication coverage in the region, upgradation of the village guards system where it had been set up, further improvement of road infrastructure at international borders, early finishing of fencing and floodlighting at the border and exploring alternative options for difficult terrains such as hills, riverine areas and wildlife parks.