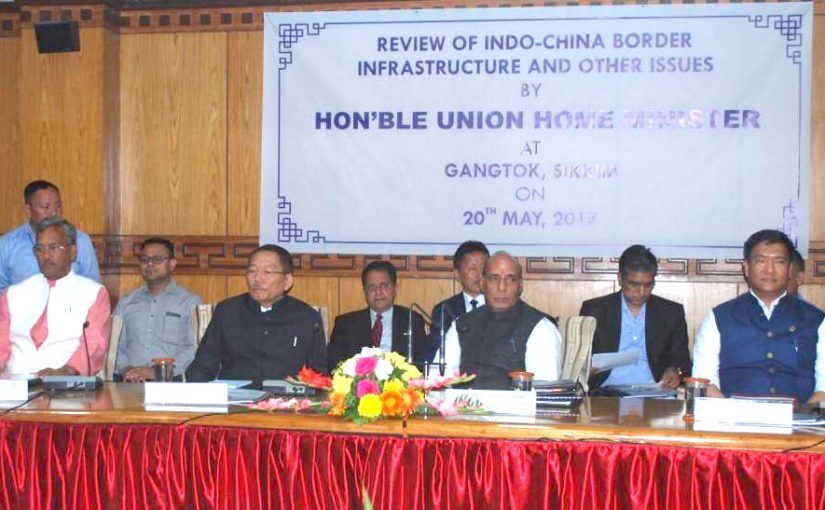 
Central Assistance for Border Area Development Programmes (BADP) has been enhanced from Rupees 990 Crore in 2016-17 to Rs. 1,100 Crore in the current financial year, the Union Home Minister Shri Rajnath Singh said this while chairing the review meeting of Chief Ministers bordering with China, in Gangtok today.

He said that the Indo-China border is undemarcated, extremely cold with very difficult terrain and thus it is more important that impetus should be given to boost up infrastructure and peace in the border areas. The Home Minister praised the work of ITBP and said that the Centre was doing everything feasible for their smooth functioning in overcoming challenges. He stressed upon the development of model villages in the border areas and said that innovative and concrete proposals are welcome. Implementation of Border Areas Development Programme (BADP) projects and construction of border infrastructures are being taken up with high priority, he added.

The Chief Minister of Sikkim, Shri Pawan Kumar Chamling said that the army, paramilitary and the Government of Sikkim are implement ing a number of schemes under the BADP which are designed to meet the special developmental needs of the people living in remote and inaccessible border areas. The Chief Minister of Uttarakhand, Shri Trivendra Singh Rawat and Chief Minister of Arunachal Pradesh, Shri Pema Khandu also briefed the Union Minister on the issues related to development. Issues concerning border infrastructure including border roads, Border Out Posts, critical infrastructure and coordination between the concerned States and ITBP stationed in states were some of the main issues deliberated upon in the meeting. The states of Jammu & Kashmir and Himachal Pradesh were represented by Senior Officers.

Earlier, Secretary, Department of Border Management, Ministry of Home Affairs (MHA), Smt Sanjeevanee Kutty presented the broad agenda of the meeting and apprised about the various programmes and initiatives being taken for development of infrastructure and other facilities for the security personnel and the population living in border areas. Likewise, a brief presentation was made by the Director General, ITBP, Shri Krishna Chaudhary.

Chief Secretary, Government of Sikkim, Shri A.K. Shrivastava gave the vote of thanks where he thanked the Union Minister for sparing his valuable time and visiting the beautiful state. He also thanked the various dignitaries of different states for attending the meeting of this kind which had happened for the very first time.

Later, addressing a press conference, Union Home Minister Shri Rajnath Singh expressed pleasure that such a review meeting concerning infrastructure and other issues in Indo-China Border states was held for the first time. He appreciated the participation and inputs provided by the Chief Ministers of Uttarakhand, Arunachal Pradesh and Sikkim and officials from the states of Jammu & Kashmir and Himachal Pradesh. He put on record his appreciation for the contribution of Sikkim as the host state fort the meeting.

The Home Minister briefed the media about the various developmental projects being implemented by the MHA in the Border States. He also shared information regarding some of the projects and proposals in the pipeline. Shri Rajnath Singh stated that along with the border security forces, equal impetus should be given for the upliftment of civilian people living in these border areas. He stated that these people are the strategic assets of the country and their basic needs should be addressed. He added that the State Government of the Indo-China Border states have been requested to look into these issues.

Likewise, Shri Rajnath Singh informed that the MHA is focusing on modern villages, and stated that in the last financial year, 41 model villages were created for which a financial allocation of Rs. 92 Crore was made. He further urged the State Governments to submit maximum proposals for model villages to the Central Government. He further added that the issues concerning border areas are to be jointly addressed by the State and the Central Government in a coordinated way. He stated that any hindrances like land acquisitions, forest clearances and allocation of quarries should be sorted out diligently and in a time bound manner by the State Government with support from the Central Government.

Earlier, the Home Minister visited Nathula Pass and addressed a Sainik Sabha during his visit to the ITBP Border Out Post (BOP) Sherathang near Nathu La. Shri Rajnath Singh also laid the foundation stone of various ITBP projects in Gangtok.

Yesterday, upon his arrival on a 3-day visit to Sikkim, the Union Home Minister met the Governor Shri Shriniwas Patil and held talks with the Chief Minister Shri Pawan Kumar Chamling.