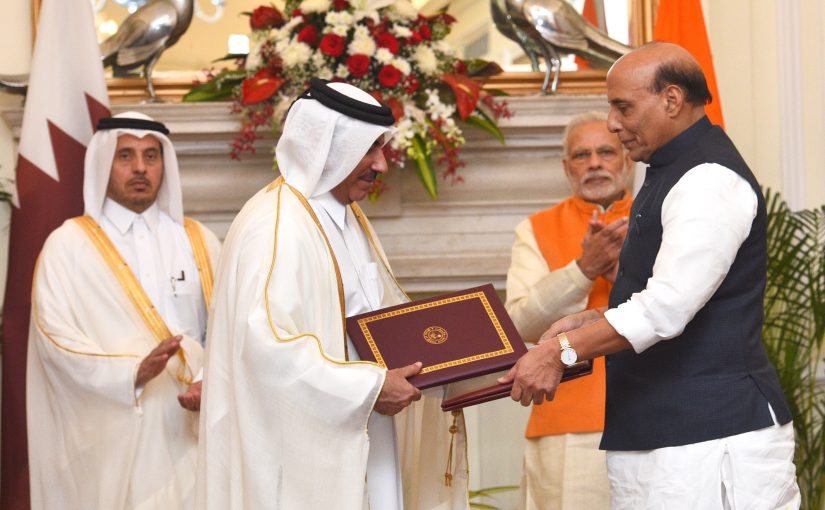 Regarding the security cooperation between the two countries, the Prime Minister of Qatar suggested to send a delegation from the Interior Ministry to study different aspects of security cooperation. Qatar side also agreed to send a team of officers for exchange of information between the two countries and asked for a suitable date. The Union Minister assured to indicate a suitable date to the Qatar side at the earliest.

The Prime Minister of Qatar invited the Union Home Minister to visit Qatar to strengthen bilateral security cooperation with special arrangements for security of FIFA World Cup – 2022 in Qatar. Shri Rajnath Singh offered training of police personnel to the Qatar side which was accepted in the meeting.

India thanked Qatar for their amnesty scheme of facilitating Indian workers with irregular visa status to return to India without visa or get their visa extended in Qatar. The Prime Minister of Qatar went a step ahead and assured of similar amnesty as well.

The bilateral cooperation in the field of food security was also discussed in detail by the two leaders. It was mentioned that the food companies of various countries are ready to invest in Qatar but the Prime Minister of Qatar desired for a large number Indian food companies to come to Qatar for investment. He also offered priority assistance to the Indian food companies for promotion of their activities in Qatar.

The meeting was held in very cordial atmosphere which was attended by the senior officers from the Ministry of Home Affairs and the Ministry of External Affairs in addition to the visiting delegation of Qatar.