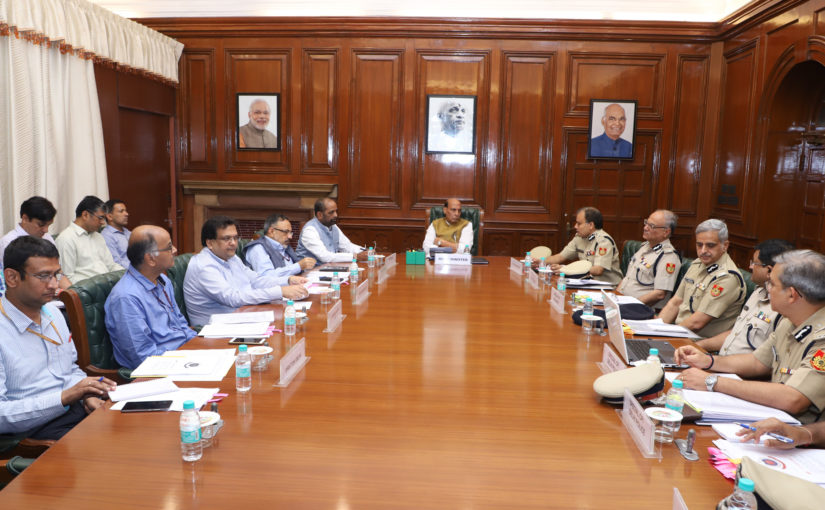 The Union Home Minister, Shri Rajnath Singh, while chairing review meeting of Delhi Police here today, emphasized the need to bring about a perceptional change of the functions and responsibilities of Police personnel, among the citizens of the city.  In order to achieve this objective, he stressed the need for Police to have a hassle free and citizen-friendly inter-face with the public, for senior officers to lead patrolling parties, especially in sensitive areas of the city; and, to employ technology as a force multiplier in achieving policing objectives.

The Union Home Minister was informed the Delhi Police has commissioned a Crime Victimzation Survey in May through an independent agency, the Quality Council of India (QCI), which will be conducted soon.

Shri Rajnath Singh lauded the Delhi Police for achieving a very swift Response time to emergencies which compared favourably with the best in the world. With the setting up of state-of-the-art Control Room by March next year under the National Emergency Support System (NESS) project, the response time is set to further improve drastically. The Union Home Minister appreciated that more than 75% of 944 Distress Callers in Delhi have given positive feedback of the Police to an online survey.

Lauding the relentless efforts of the Delhi Police to improve law and order in the national capital, Shri Rajnath Singh expressed satisfaction the heinous crimes in the capital have dropped from a high of 10,266 cases in the year 2014 to 6,527 last year. The Union Home Minister however voiced concern over the low conviction rate as compared to other metros, – Mumbai and Chennai, and called for steps to strengthen the Investigation Wing of the force. MHA has sanctioned 4,227 posts (SI/ASI 1409, HC-1,409 and Ct.-1,409) for the purpose of separation of Crime Investigation and Law & Order functions. Delhi Police Commissioner Shri Amulya Patnaik said the process to create a Cadre of Investigation Officers is underway.

The Union Home Minister directed urgent implementation of the National Emergency Support System (NESS). Shri Rajnath Singh said a scientific assessment and evaluation of the CCTV requirements for the city should be carried out. Delhi Police has undertaken installation of CCTVs at ten Police Stations on a pilot programme basis which will subsequently be implemented in the remaining 184 Police Stations. Also, Delhi Police has plans to install 10,000 CCTVs at public places for Women’s Safety of which nearly 4,000 are in place. Besides, more than 2 lakh CCTVs have been installed by the public under the Nigehban scheme.

Shri Rajnath Singh said there should be zero tolerance for traffic violations and called for more deployment of women in PCR vans. Commissioner Shri Amulya Patnaik said 33% women are being inducted in all ongoing recruitments while their representation in the force is already much higher than the sanctioned strength. An RFP will be issued soon for implementation of the Intelligent Traffic Management System (ITMS) in the city and should be in place by 2022. Besides, the Delhi Police is the only force in the country which has enabled registration of e-FIR for cases of Mobile Phone and Vehicle theft.

The Union Home Minister called upon the senior officers to fastrack projects to achieve optimum utilization of funds under the capital category. Calling for raising satisfaction among the force personnel, Shri Rajnath Singh directed expeditious implementation of Housing projects which stands at a low of about 15%.