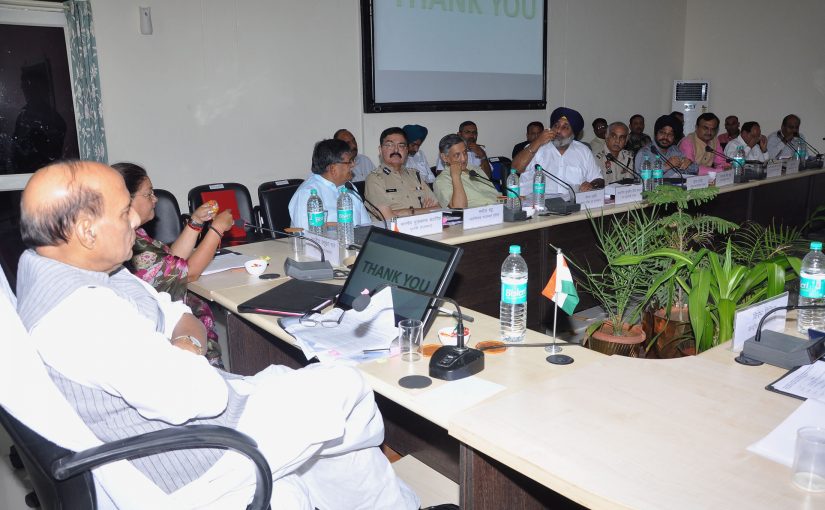 Inaugurating the meeting, Shri Rajnath Singh sought the active participation of the States to secure the International Border with Pakistan by putting physical and non- physical barriers.

Shri Rajnath Singh asked the Ministry of Home Affairs (MHA), Border Security Force and participating States for faster implementation of infrastructure projects, effective monitoring, intelligence sharing and inter-agency cooperation in view of the prevailing security scenario in the country. He also invited the suggestions in this regard from the participants.

MHA made a presentation in which the participants deliberated all the issues and gave their valuable suggestions.

The Chief Minister of Rajasthan Smt. Vasundhara Raje raised issues regarding Police Modernization, security in the hinterland and the peculiar problems due to sparsely populated desert area with shifting sand dunes. She suggested that an Integrated Check Post be established at Munnabao.

The Deputy Chief Minister of Punjab Shri Sukhbir Singh Badal drew attention to the problems of farmers having land across the border and the problems created by the smuggling of arms and drugs from Pakistan.

The MoS for Home Affairs, Gujarat, Shri Pradeep Sinh B. Jadeja stated that in the marshy areas of the Rann of Kutch, where fencing is not possible, there is a need for improvement in the construction of roads and use of technology for surveillance.

The Union MoS for Home Affairs Shri Kiren Rijiju also shared his views on the management of border situation.

It was resolved that the central and state Governments will work together to resolve all problems at the earliest for effectively protecting the border.

Shri Rajnath Singh stated that the inputs of the participants have been very useful and the Government will use these in the policy formulation.