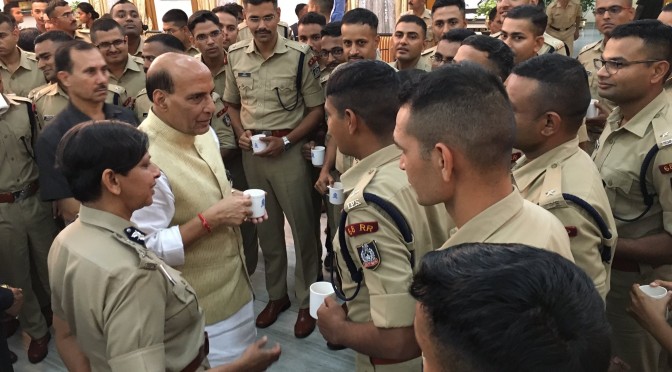 The Union Home Minister Shri Rajnath Singh has said that cybercrimes today pose the biggest challenge to the security and law enforcement forces. Addressing the Indian Police Service (IPS) probationers and other officers at the Sardar Vallabhbhai Patel National Police Academy (SVPNPA) in Hyderabad today, he said the role of police is changing with the advancement in technology. Quoting reports of the National Crime Records Bureau, Shri Rajnath Singh said that cybercrimes are increasing at a rapid pace. In the last decade there has been an alarming 2400 percent rise in cybercrimes, he added.

Exhorting the young police officers to adapt themselves to the rapid changes in technology and the threats posed by cybercrimes, the Union Home Minister said there are several challenges facing the country. Shri Rajnath Singh said the police forces should be mindful of their role while serving the people. We should always keep in mind that we are public servants and we need to discharge our duties accordingly. The police forces work in public domain and they are always under constant public scrutiny, he added.

Pointing out that the Police Forces have to be impartial and unbiased while discharging their duty to uphold the law and order, the Union Home Minister said India is a land of diversities and is home to several religious beliefs. We have a tradition of living in peace and harmony, he said.

Stressing on probity and integrity in public life, Shri Rajnath Singh said money is not everything and happiness cannot be achieved by accumulation of wealth. One should never work half-heartedly, no big goal can be achieved without full dedication, he observed.

Earlier Shri Rajnath Singh laid a wreath at the Martyrs’ Memorial and inaugurated the Advanced Courses Mess Building at SVPNPA. He also freely interacted with the IPS Probationers.