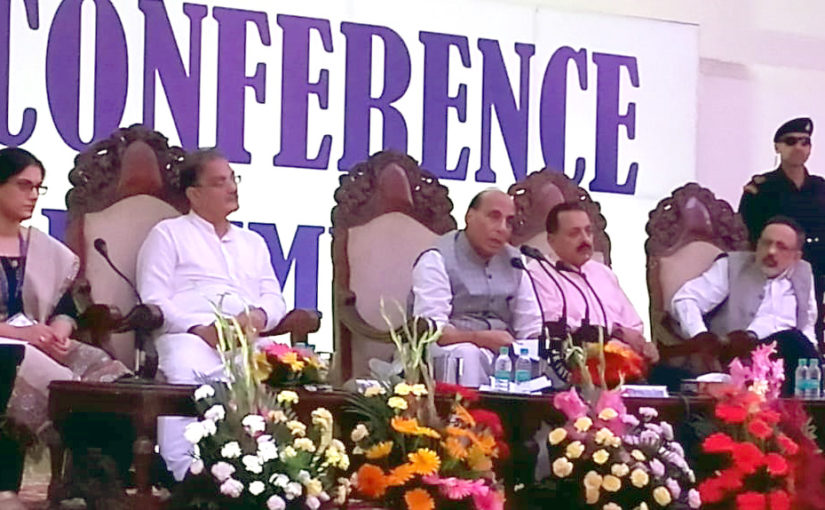 Union Home Minister Shri Rajnath Singh said that nine new Battalions will be constituted. Of these, two would be for the areas near the border. He said that the Ministry has sanctioned two new women battalions for J&K police: one for Kashmir Division and for Jammu Division that would provide employment to around 2000 women from the state. He further added that the border youth would be provided 60 percent quota in special five IRP battalions being raised. He was addressing a press conference in Jammu on the second day of his visit to the state of Jammu and Kashmir.

Reiterating government’s commitment to safeguard the interests of border people and Kashmir migrants in Jammu and Kashmir, Shri Home Minister Rajnath Singh said that Centre is fully aware of the hardships faced by these people and has been taking a number of initiatives to address them. He also informed that the Ministry has revisited the scheme of giving Rs 5 lakhs for the persons killed during Cross Border Firing and Ceasefire Violations.

Now this amount of Rs 5 Lakhs will be directly credited to the account of Next of Kin and all conditions relating to fixed deposit have been removed, the Home Minister said. He said that 14, 460 bunkers will be constructed, which includes 13,029 individual and 1,431 community bunkers. The MHA has approved Rs.415 crores for their construction, he added. He further said that government is contemplating construction of Seema-Bhawans for the safety of border people.

While addressing media persons at Jammu Shri Rajnath Singh said that the Government has decided to give financial assistance of Rs 5.5 lakh per family for West Pakistan Refugees settled in the State of Jammu and Kashmir. Nearly 5764 families will be benefitted from this decision, he added. He also said that the relief given to Kashmiri and Jammu migrants that was increased to Rs 10,000 in year 2015, has now been further increased to Rs 13000 per family per month, thus resulting into a hike of 30%.

He also said that an Advisory board for migrants would be constituted to look into the problems being faced by the them that would have representation from all the migrant groups. He also said that five Bullet proof ambulances will be provided to border areas to carry the injured to hospital during cross border firing.

The Home Minister also spoke about the recent decisions taken by the Ministry regarding the compensation for live-stock that has been increased to Rs. 50,000 from Rs. 30,000 presently and that the limit of three animals has been removed for losses incurred upon livestock.