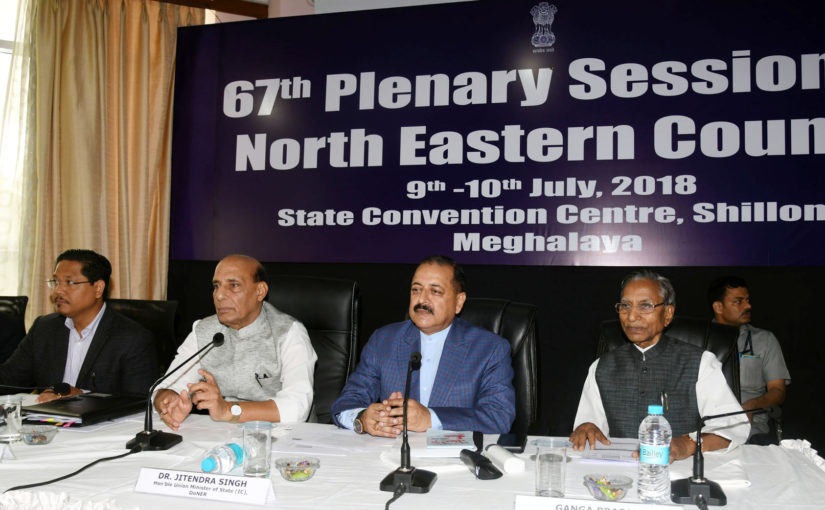 The dream of ‘New India’ will be realised with the vision of a ‘New North East’: HM Shri Rajnath Singh

The Union Home Minister Shri Rajnath Singh has said the road to ‘New India’ will go through a developed and peaceful ‘New North East’. Addressing the concluding session during the 67th Plenary Session of the NEC in Shillong today, he said the Prime Minister Shri Narendra Modi has a dream of New India by 2022. The dream of ‘New India’ will be realised with the vision of a ‘New North East’, he added.

The Home Minister said the ‘New North East’ will emerge with better Road Connectivity and Information Technology. “The North East needs better Road Connectivity and it has recently made some progress in this area. The economic potential of the region will be realised with better connectivity,” said Shri Rajnath Singh. “If we can provide quality broadband services in the region the youth of the North East will find the employment opportunities closer to their home. It would also stop the migration of local youth to distant areas of the country,” he added.

Shri Rajnath Singh said impetus to employment and income generation will help contain the problems like insurgency in the North Eastern Region (NER). “The North-Eastern states need to create a conducive environment for private investments which should make the investors feel safe and their problems are addressed. It will give a big boost to investments,” he said.

The Union Home Minister also stressed on accelerating growth of Agriculture to achieve the Prime Minister Shri Narendra Modi’s dream of doubling the farmers’ income by 2022. “We should focus on growing low volume-high value crops for export. Railway Ministry can help in exporting the perishable commodities and horticulture produce like kiwis and flowers through superfast AC wagons.”

He suggested the revival of North Eastern Regional Agricultural Marketing Corporation Limited (NERAMAC) for marketing of agriculture produce. “The North Eastern Region Community Resource Management Project (NERCORMP) with the Self Help Groups can extend help in this effort to increase the income and employment generation in the region.”

The Union Home Minister said each of the North Eastern States is blessed with unique development potential. “We need to identify those specific development areas and chalk out a plan with effective implementation. The implementation should be in a time bound manner,” said Shri Rajnath Singh. “We need to prevent leakages in the system and ensure total transparency and accountability. I urge the Chief Ministers of all North Eastern states to work towards this end with missionary zeal,” he added.

The two-day 67th Plenary of the NEC was attended by the Union Minister of State (Independent Charge) for Development of North Eastern Region (DoNER), MoS PMO, Personnel, Public Grievances & Pensions, Atomic Energy and Space, Dr Jitendra Singh, who is also the Vice-Chairman of the NEC, besides Governors and Chief Ministers and senior officers of the eight North-Eastern states and Union Ministry of DoNER.