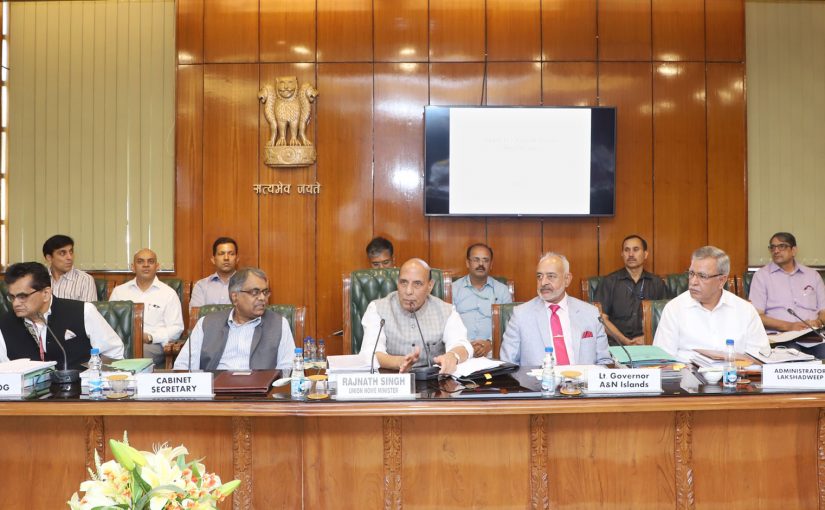 CEO, NITI Aayog made detailed presentation giving details of actions taken in pursuance to decisions taken in earlier meetings. The Union Home Minister expressed satisfaction at the progress made since its last meeting held on November 8, 2017 when directions were given to identify additional Islands for sustainable development and also accord priority to key infrastructure projects. Additional Islands/Locations in Islands, 12 in Andaman and Nicobar (North Passage, Cinque, Inglis, Viper, Neil (Bharatpur Beach), Ramnagar Beach, Karmatang Beach, Dhaninallah Beach, Kalipur Beach, Rutland, North Bay and Great Nicobar – B Quarry) and 5 in Lakshadweep (Kalpeni, Kadmat, Agatti, Chetlat and Bitra) have been identified by NITI Aayog, in consultation with the UT Administrations, for planning of suitable projects aimed at creation of more jobs for the Islanders. Community-based tourism would be promoted benefiting the Islanders.

Key Infrastructure projects such as creation of jetties/berthing facilities, Roll-on/Roll-off ships; Bridges on Andaman Trunk Road; Upgradation of Diglipur Airport; Construction of Minicoy Airport; Modernization of existing Jetty at Kavarati; Augmentation of Satellite Bandwidth from 1.118 Gbps to 2.118 Gbps in Andaman & Nicobar; augmentation of helicopter services for Islanders and tourists etc. are being accorded priority. With better communication services, Information Technology based and other Micro, Small and Medium Enterprises (MSME) would be promoted in the Islands.

Further, after carrying out systematic study, 18 Projects, both in Andaman & Nicobar and Lakshadweep, have been identified for implementation, out of which 7 Projects are ready for launch through PPP. 3 such projects in Andaman & Nicobar (one each in Long, Smith and Ayes Island) and 3 in Lakshadweep (one each in Suheli, Minicoy and Kadamat) are ready to be launched. After implementation of these projects, investment of about Rs. 650 crore is expected from the private sector. Preference would be given to the local people for employment. It was informed that investors’ conference would be held in May, 2018.

Union Home Minister called upon all concerned to expedite implementation of ongoing key infrastructure projects in the islands, particularly for improving air, road and web connectivity; providing good quality drinking water to the residents; and power supply. He directed that designs of these projects be made in such a way to provide maximum benefits to the local population. Home Minister observed that development of Islands was first discussed in 1999 and now it is taking concrete shape. He appreciated collective efforts being made by all the Ministries for holistic and sustainable development of Islands.