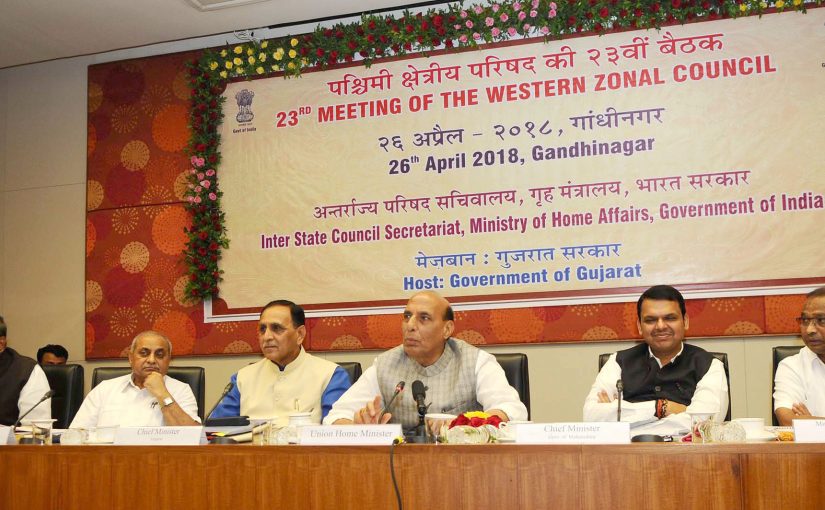 The 23rd meeting of the Western Zonal Council was held at Gandhinagar, Gujarat today under the Chairmanship of the Union Home Minister Shri Rajnath Singh. The meeting was attended by the Chief Ministers of Maharashtra and Gujarat, Ministers of Gujarat, Maharashtra, Goa and Administrator of the Union Territories of Daman & Diu and Dadra & Nagar Haveli, and senior officers from Central and State Governments.

The Chief Minister of Gujarat, Shri Vijay Rupani, in his welcome address, emphasised the need for coordination and cooperation of the Western Zonal States on the issue of marine security. He further, inter alia, stated about the introduction of the virtual teaching in about 8,000 classes, providing 5,000 policemen with smart phones having record of criminals, appointment of 33% Women in Police Force, establishment of the state-of-the art Forensic University in the State etc.

The Union Home Minister stated that the Zonal Councils were established under the States Reorganisation Act, 1956 with the objective to develop the habit of cooperative working among the States and between the Centre and the States. The Zonal Councils are mandated to discuss and make recommendations on any matter of common interest in the field of economic and social planning.

Shri Rajnath Singh reiterated the Centre’s resolve to promote cooperative federalism with the states. He further stated that during the last 3 years or so, 2 Council meetings and 3 Standing Committee meetings of the Western Zonal Council were held. In these Council meetings, 41 items had been discussed and 31 resolved.

During this period including other Zones (Eastern, Central, Northern and Southern) 10 Council meetings and 15 Standing Committee meetings were held. In these meetings including today’s meeting about 653 items had been discussed and approximately 411 issues had been resolved.

The Council reviewed the progress of the implementation of the recommendations made at the last meeting relating to surplus lands of various Organisations of Central Government to be made available for achieving objectives of “Housing for All: 2022” and issues relating to Aadhaar. Thereafter, the Council took up issues which relate to stamp duty on Imports, problems pertaining to parking in JN Port, non-signing of Power Purchase Agreements by Maharashtra with Renewable Energy Operators, implementation of the provisions of the PESA Act, capacity building for developing Trauma Care facilities, full immunization coverage, National Aids Control Programme, issues relating to Input Tax Credit on Natural Gas, etc. Out of the 16 items (including sub items) discussed today, 14 were resolved in the meeting with mutual understanding and consensus.

The deliberations of the Council were warm and cordial, in the true spirit of cooperative federalism and ended with the decision to host the next meeting in Goa.