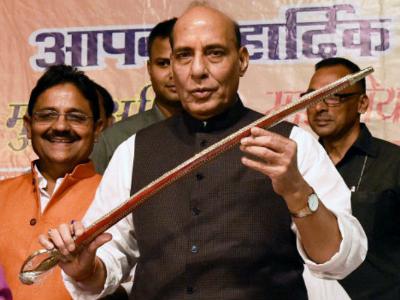 Shocked to know UP has seen rise of 161% in rape cases: Rajnath Singh

People are also asking “why never before in Uttar Pradesh, incidents of such magnitude had taken place?” Rajnath said, explaining why he was calling the state “prashna pradesh”.

Quoting from the UP BJP’s political resolution passed on Saturday, the Union Home Minister said that he was shocked to know that the state has seen a rise of 161 per cent in cases of rape.

Expressing shock over the state of affairs and admitting that he never imagined that the situation was so bad in the state, Singh said: “Against over 3000 cases of rapes in 2014, over 9000 rape cases have been reported in 2015. And these statistics are from the State Crime Record Bureau.”

Clarifying on the allegations made by the state government about Centre stalling funds, Singh said, “Earlier the share of taxes for the states was only 32 per cent. However, for the first time since Independence, the Modi government has increased the state’s share to 42 per cent.”

He also hit out at Akhilesh government for ignoring the farmers’ interest and cited how non-cooperation from the state government has prevented the UP farmers from the benefits of crop insurance scheme.

Our opponents say that the Centre is biased against non-BJP state governments, but Modi government has cleared 61 national highway projects alone in Uttar Pradesh. The centre is determined for the all-round development of the country, he said and added that people are asking question from the state government why other states in the country are developing and not UP.

Rajnath Singh, who was attending the first meeting of the UP working committee ever since he became the Union Home Minister, cited his busy schedule as the reason for his absence but promised to take out time whenever the UP unit will require to ensure that the BJP forms government in the state.

Earlier, he arrived to a rousing welcome by the BJP workers.

Urging the BJP cadre to work with missionary zeal to ensure success in 2017 assembly election, Singh said that the atmosphere was favourable and sheer hard work could pave the way for a BJP government in the state.

It has been 14 to 15 years that the state has seen either the SP or the BSP governments, Singh said and added till what time people of the state would be trapped between SP and BSP.
The Union Home Minister ended his speech with a Kabir’s couplet to showcase people’s condition in the state: “Chalti chakki dekh ke diya Kabira roye, do paatan ke beench mein sabut baccha na koye”.
Source : TOI
Share this...