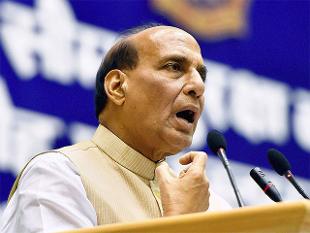 Rajnath Singh to lead an all-party delegation to Jammu & Kashmir

NEW DELHI: Rajnath Singh will lead an all-party delegation to Jammu and Kashmir early next month to hold talks with different sections in the state. In a related development, the Centre has clarified that pellet guns used by security forces for crowd control will not be banned but used only in “rarest of rare cases”.

The delegation, whose composition is still being worked out, will visit Jammu and Kashmir on September 4 and may also interact with various stakeholders in Jammu on September 6. The Congress has not clarified whether party vice-president Rahul Gandhi would be part of the all-party delegation. Rajiv Gandhi and Sonia Gandhi were members of all-party delegations that visited J&K during the VP Singh and Vajpayee regimes, respectively.

AICC sources underplayed the issue by saying that the composition of the Congress team was yet to be finalised. Singh had during an hour-long meeting with BJP president Amit Shah, finance minister Arun Jaitley and MoS for PMO Jitendra Singh on Sunday discussed modalities of the all-party delegation. Sources said the meeting also discussed the possible individuals and groups with whom the delegation could interact.

The government has sounded out different political parties to give names of their functionaries who would be part of the team. The clarification on pellet guns comes almost a week after Singh said in Srinagar during a news conference with CM Mehbooba Mufti that an alternative to pellet guns would be given to security forces soon.

“We will give an alternative to the pellet guns. These guns were earlier considered non-lethal but some incidents have taken place…We formed an expert committee a month ago which was expected to give report in two months but it will be coming very soon,” Singh had said.

The expert panel, set up by the MHA to find an alternative to pellet guns, is believed to have zeroed in on ‘PAVA shells’, a chilli-based ammunition, which is less lethal but immobilises the target temporarily. The panel held a test of the shells at a test field recently and gave a thumbsup for use by security forces for crowd control in place of the pellet guns.