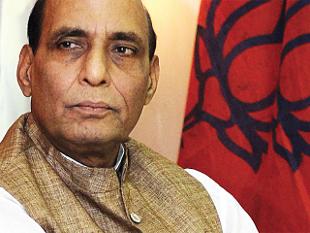 NEW DELHI: BJP is on course to winning an absolute majority in Uttar Pradesh, Union home minister Rajnath Singh told ET in an interview, rubbishing incumbent Samajwadi Party’s claims of development during its term and characterising the SP-Congress tie-up as an alliance of two weak parties dictated by their lust for power.

Singh said BJP is the only party uniformly in the contest in every assembly segment in the state, where it faces the SP-Congress alliance in some places and Bahujan Samaj Party in others.

Dismissing charges of BJP seeking to polarise the electorate or being anti-reservation, he said the party always works for inclusive politics. A former chief minister of UP who currently represents Lucknow in the Lok Sabha, Singh said the fact that SP needed an alliance with Congress itself suggests the party has weakened.

Why did it take Chief Minister Akhilesh Yadav four and a half years to assert himself, Singh asked, responding to a question on whether BJP is worried over the recent image makeover of the CM following the family feud.

“People have lost faith in SP,” he said. The seven-phase election kicks off on February 11 and votes will be counted on March 11.

Singh said when BJP’s opponents in UP claim that the party is yet to fulfil its 2014 promise of ‘achhe din (good days)’, they actually mean that is the case in the state. “Pradesh sarkar ne grahan laga diya hai (The state government has caused an eclipse), which is why they can’t see it,” he said.

Ruling out campaigning for his first-time contestant son Pankaj Singh in Noida on grounds of propriety, the home minister said people know Pankaj already as he has been a party worker for the past 14-15 years.

Singh, while claiming the government’s demonetisation drive has been universally welcomed, said no election can be a referendum on a single issue.