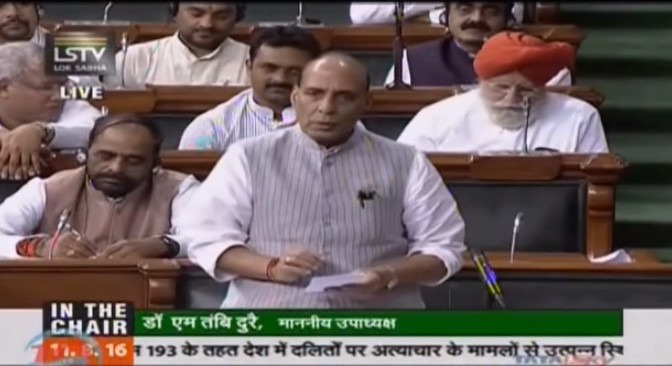 NEW DELHI: The Centre strongly rebutted on Thursday the charge that crimes against Dalits had increased under its watch, with home minister Rajnath Singh challenging the opposition to provide statistics to back up such claims even as he promised stern action against gau rakshaks who indulged in violence.

Singh read out statistics + over the 2013-15 period to argue that there was no discernible change in trend. There were 39,346 cases in 2013 – under UPA – and 40,300 and 38,500 in the following two years, he said. “Where is the proof (of a spike in cases)? Where is the data? This is an example of a ‘vikrit maansikta’ (distorted mindset),” the home minister said, as he addressed the opposition at the end of a debate on atrocities against Dalits that was marked by some sharp exchanges, with the opposition claiming the government had failed to check violence targeting Scheduled Castes.

Though Singh struck a largely non-confrontational note, saying it was the responsibility of all parties to act against anti-Dalit violence and said he would urge states to take firm action, he strongly defended RSS and its affiliates, saying the Sangh was the biggest organisation working for the welfare of tribals and SCs.

Singh’s advocacy of the Sangh comes in the wake of criticism that cow vigilantism + was encouraged by the postures RSS has adopted on issues like beef ban and the actions of its affiliates like VHP. “Sewa Bharti and Vanvasi Kalyan Ashrams have done a lot for the weaker sections,” he said. Singh clarified that strict punishment would be meted out to those perpetrating atrocities on Dalits in the name of gau raksha, after BJD MP Tathagata Satpathy sought a more specific statement on gau rakshaks, reminding the minister that PM Modi had spoken on the subject too.

Singh immediately obliged, saying he may not have stated this as effectively as desired by the BJD MP and said, “Some anti-social elements are indulging in nefarious activities in the name of cow protection… I appeal to all state governments to take strict possible action against them.”

The discussion was marred by acrimony and a walkout by Congress and Left members who alleged that incidents of atrocities against Dalits + had increased since the Modi government assumed office. BJP speakers hit back, arguing that it was Congress which had denied Dalit icon B R Ambedkar entry to Lok Sabha and pointing out that the NDA had made laws protecting Dalits more stringent.

“We have to accept the truth that atrocities against Dalits are going on. We have to stop it and this is a challenge for all of us,” the minister said, regretting the House was discussing the issue even 70 years after independence.

To questions as to why Modi did not speak on the Dalit issue for long, he asked the opposition to spell out if earlier prime ministers did so on each and every issue. “The prime minister+ may speak or may not speak, but his aura should be such that action is taken against the perpetrators,” Singh said as he also defended the Gujarat government against the charge that it reacted late to the outrage at Una where Dalits were flogged.

Singh admitted that laws were there to protect Dalits but much was desired to be done. “Our government is trying to check atrocities on Dalits. For their socio-economic uplift, new laws have been made,” he said, adding there was a need to deliberate on how to stop such incidents.

“There is an illusion that since our government came to power, atrocities against Dalits have gone up”, he said, condemning the Una incident in Gujarat that triggered nationwide protests.