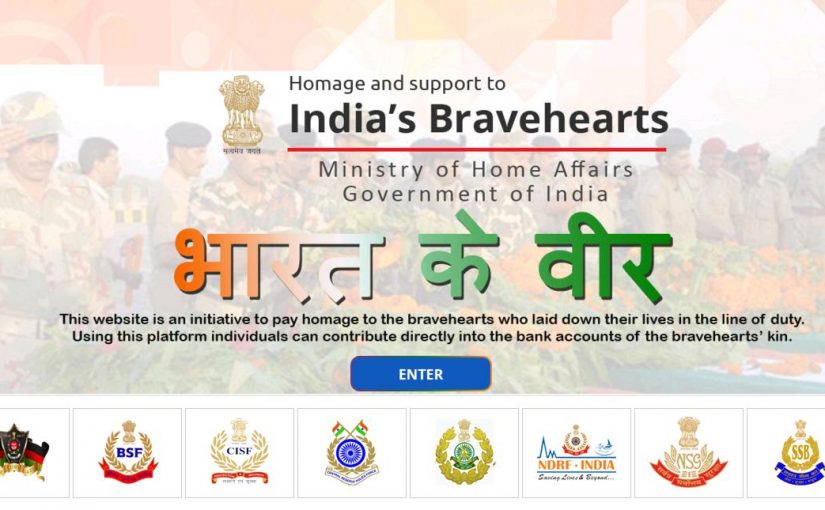 A sum of ~ Rs 2.10 crore has been donated by the people to a fund set up a month ago by the Home Ministry to help families of paramilitary personnel who laid down their lives fighting extremists.

Rs 60 lakh of the said amount has been received for 25 personnel who were massacred by the Naxals at Sukma in Chhattisgarh on April 24.

Encouraging response to #BharatKeVeer website. Within a month, the portal has received more than Rs 2 crores for helping martyrs' families. pic.twitter.com/bcDnLZ9nSo

The monetary contributions made on https://t.co/P0bMWQ9gJo go straight into the bank account of martyred soldier's family.

You can also visit the #BharatKeVeer website and make a contribution to support the families of those jawans who died in the line of duty. pic.twitter.com/kTfHBS5yyN

The app and the website ‘BharatKeVeer‘ was launched last month by Shri Singh along with Bollywood actor Akshay Kumar, who mooted the idea.

General public can visit the portal and make the contribution to support the families of those jawans who died in the line of duty.

“The monetary contributions made on the website go straight into the bank account of martyred soldier’s family,” the home minister said.

Attending the launch of the app and the website, actor Akshay Kumar had lauded the Union home ministry for making his dream come true and providing a platform for everyone to help the next of the kin of slain soldiers financially.

“This website has been made exactly in two-and-a-half months. About three months ago, this idea came in my mind, while watching a documentary film on terrorists, which showed how terror leaders financially support the families of the terrorist who carry out terror acts.” Akshay had said at the inauguration.

As many as 2.60 crore people have visited the site so far.

In the baratkeveer.gov.in or Bharat Ke Veer portal, the general public can make donations online to the families of martyrs and soldiers of security forces.

The web portal and app has been launched by the Union home minister to pay homage to the brave-hearts who have laid down their lives in order to protect their country and citizens.