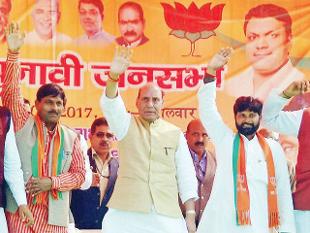 “Farm loans of small and marginal farmers will be waived by the BJP government within months of coming to power and there will be zero interest on farm loans at least for a year,” was the refrain in Singh’s election rallies in Kairana, Charthawal, Budhana and Kithore assembly segments on Tuesday.

Singh appeared to consciously avoid churning of the communal cauldron. Even in Charthawal and Budhana assembly segments, Singh avoided any mention of the 2013 Muzaffarnagar riots despite Union minister Sanjeev Balyan’s appeal to the electorate to “take revenge through ballots…our people were unfairly sent to jails by the state government”.

Balyan represents Muzaffarnagar in the Lok Sabha. Even at Kairana, the home minister did not make an issue of the alleged Hindu ‘exodus’ from the region, a claim made by his party MP Hukum Singh, whose daughter is the BJP candidate. “Kairana was in news recently.

I thought the law and order in Kairana may be poor. But, am very happy to see Hindus, Muslims and Sikhs in attendance at the rally,” Singh said referring to several people in the audience.

“I would appeal to you to not fall prey to those trying to spread hatred on religious lines… We should not let harmony deteriorate at any cost,” Singh said. As if on cue, Hukum Singh also arranged for local Muslim leaders on the dais to felicitate Rajnath Singh.

A former UP chief minister, Rajnath Singh, has been doing several rallies daily in assembly constituencies going to polls on Saturday.

He highlighted the ‘decisive nature’ of his government at the Centre to woo the electorate while rubbishing incumbent Samajwadi Party government’s claim of development and dismissing chief minister Akhilesh Yadav’s attempts at image makeover as an eyewash.

He wants to garner votes through eyewash,” Singh said at his rallies. The former BJP president also took a dig at the SP-Congress alliance: “Only the weak need crutches; but even the crutches are weak”. The BJP leader cited statistics to suggest that the state government had failed on development and in maintaining law and order.

He compared the state government’s performance with the Centre’s, claiming that there was not a single taint of corruption on the Modi government while adding that India emerged the fastest growing country during the regime.