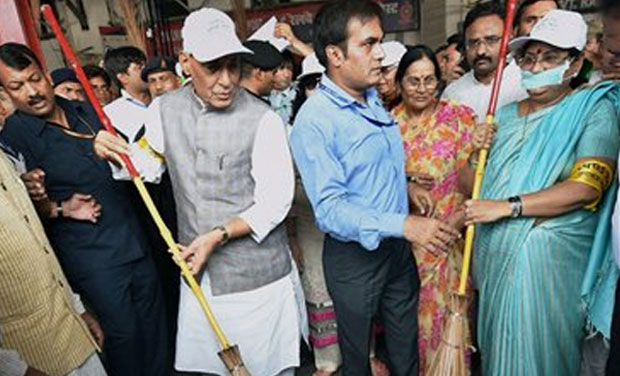 The week long Cleanliness Drive undertaken in the Union Ministry of Home Affairs as a part of the Swachh Bharat Mission will coincide tomorrow with the Gandhi Jayanti Day.
The Union Home Minister Shri Rajnath Singh, the Ministers of State for Home Affairs, Shri Hansraj Gangaram Ahir and Shri Kiren Rijiju, Union Home Secretary Shri Rajiv Mehrishi, Secretary (Border Management) Shri Susheeel Kumar, senior officers of MHA and staff ensured that their offices, corridors and surroundings of the Ministry were further cleaned and it was resolved to maintain and continue with better and clean environment in future.
During the week long campaign, each day was earmarked for different activity. On the first day, September 25, 2016, cleaning of corridors and staircases was taken up. Next day was earmarked for cleaning of Sections based in the basements, followed by disposal of old and condemned items lying in various places. While cleaning of toilets was the theme on September 28, 2016, the next day cleaning of roof tops and water tanks was ensured. On the last day of September, 2016, the maintenance of parks and fountains and pruning of trees was taken up.
Today, the staff took up the cleaning of floor stone and wall stones while tomorrow the cleaning of the areas outside the office including parking lots and pathways will be vigorously pursued.