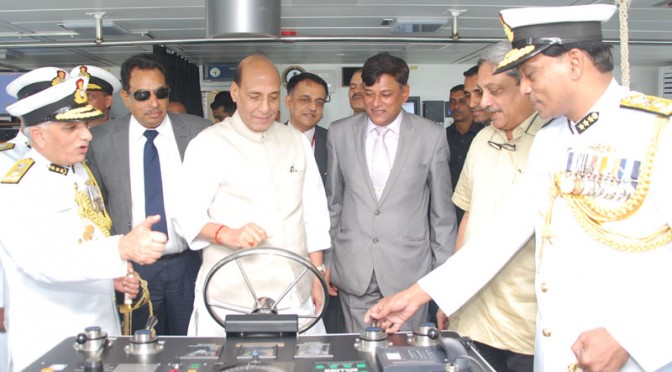 Vasco (Goa), Sep 9 (PTI) Terming maritime terrorism as a major threat, Union Home Minister Rajnath Singh today said the government has started the process of security audit to identify vulnerable areas in the seas and along the coastline.

After commissioning Coast Guard ship ‘Sarathi’, Singh said the government has been successful in addressing the issues pertaining to maritime security post Mumbai terror attack in November 2008 which was carried out by terrorists who came through the sea.

“Maritime terrorism continues to be a security threat as we have a long coastline with many big cities and security installations.

“We have started the process of security audit to identify vulnerable areas in our seas and coastal areas,” he said in presence of Defence Minister Manohar Parrikar here.

“For better coordination among the agencies responsible for coastal security, the Director General of Coast Guard has been designated as commander of coastal security,” he said, adding the coast guarding force should also work towards the safety and conservation of India’s maritime ecosystem.

Highlighting the role of Coast Guard, the Home Minister hailed it as the central pillar of India’s security architecture with two other important pillars of Navy and Marine Police.

The Coast Guard ship ‘Sarathi’ is the third in the series of six 105 meters offshore patrol vessels.

‘Sarathi’ meaning ‘charioteer’ is a projection of Indian Coast Guard’s will and commitment to serve and protect the maritime interests of the nation.

The ship has been designed and built indigenously by Goa Shipyard Ltd and fitted with advanced navigation and communication equipment and sensors.

The ship is also capable of carrying pollution response equipment to combat any oil spill contamination at sea.

The ship draws 2,350 tonnes and is propelled by two 9,100 KW diesel engine to attain a maximum speed of 23 knots and has an endurance of 6,000 nautical miles at economical speed.

The ship has a complement of 14 officers and 98 men.