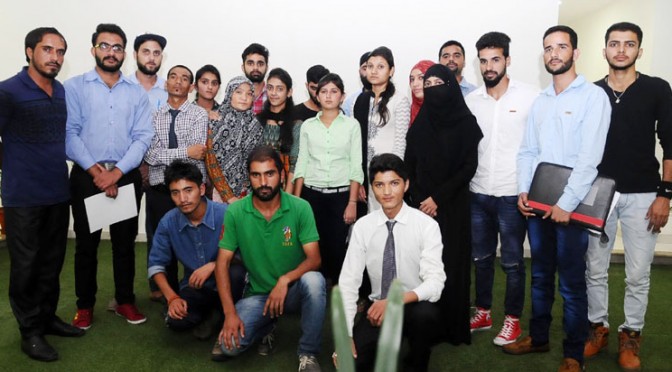 New Delhi, Sep 7 (PTI) Home Minister Rajnath Singh today met a group of students from Jammu and Kashmir, studying in various universities in the country, and assured them that difficulties being faced by them with regard to academics will be resolved soon.

Four days ago, Singh had turned a good samaritan for a group of students from Jammu and Kashmir studying in a university in Jaipur, Rajasthan, who were facing difficulties in getting benefits of a government scholarship.

After witnessing the plight of the students hailing from Srinagar, Jammu and Ladakh on a news channel, Singh had first called up the journalist who reported the story and subsequently contacted the Rajasthan Education minister.

He sought resolution of their problem which pertained to availing the Prime Ministers Special Scholarship scheme and also asked the students to meet him here.

The Home Minister later tweeted “HRD Minister has assured these students that their grievances pertaining to PM scholarships will be addressed & resolved on priority basis.”

“The students will be meeting officials of the Human Resource Development (HRD) Ministry tomorrow,” a senior official said.

A 24×7 grievance redressal helpline was recently set up by the Home Ministry for helping people from the Valley, particularly students residing out of the state.

It had nominated Sanjay Roy, Director (Media), as the nodal officer for this task.

The nodal officer will receive complaints from Kashmiri people and youths facing harassment in different parts of the country. He will also coordinate with states for an early disposal of such cases.

The announcement for appointing such an officer was made by the Home Minister during his two-day visit to Kashmir Valley recently during which several political parties had raised the issue of harassment of Kashmiri youths in various parts of the country.

During the recent unrest in the Valley, reports of alleged harassment of Kashmiri youths were received from states including Madhya Pradesh, Rajasthan, Karnataka, Maharashtra and Uttar Pradesh.