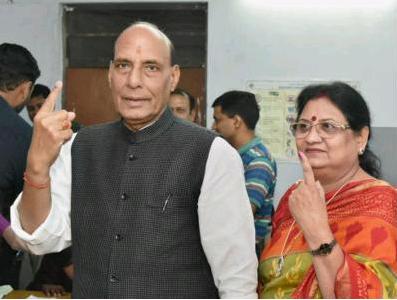 I have no intention of returning to state politics: Rajnath Singh || Times of India

LUCKNOW: It’s a dangerous situation in which politicians facing grim charges of corruption, crime and misuse of authority are seeking votes to be MLAs, but public should introspect before exercising their franchise, says Union home minister Rajnath Singh, speaking to Subhash Mishra in Lucknow.

There are serious criminal charges against UP cabinet minister Gayatri Prajapati. What does that say about politics in the state?
I give top priority to `loklajja’ (propriety) in social and political life. I appeal to all to stay away from crime, corruption and serve society, state and nation. I’d quit politics if ever such charges are levelled against me and expect the same from other netas.

Why has BJP not fielded any Muslim and is seen as anti-minority?
I enjoy the confidence of all castes and communities. It’s a misconception against BJP. The present government has taken up a series of minority welfare programmes.

Demonetisation caused the public inconvenience, hit GDP but your government claims otherwise.
Demonetisation was in national interest. Questions shouldn’t be raised on the PM’s intentions to fight the corrupt and black money. Even if there was some initial hardship, the government tackled it.

If your party asks you to take charge as UP CM after elections, will you?
I’ve no intention of returning to state politics. But let the party decide.

Are these elections a referendum on demonetisation and the PM’s performance?
No, in the assembly elections, local and regional issues play a major role. The PM’s popularity and his un blemished image are assets. The outcome of the election should not be linked to any one policy or the PM Modi’s popularity .

If BJP loses UP, will that mean a decline in Narendra Modi’s popularity?
How can anyone say that when we’re winning two-thirds majority? There’s no question of BJP’s defeat.
There’s an impression that BJP is turning pro-OBC and dumping Brahmins. Even A B Vajpayee finds little place in the campaign…
I’ve been mentioning Atalji fondly in my speeches. Not only the party , the nation is grateful for having such a states man. BJP holds Atal ji in high regard.

The issue of a ticket to your son Pankaj is the buzz in party circles. Comment?
In 2012, when I was BJP president, I dropped Pankaj’s name from the list finalised by the selection committee. Then, even Kalyan Singh, who played a role in ticket distribution in UP, had recommended Pankaj. But I deleted his name because I wasn’t in favour, being party president, to allot the symbol to my son. I’m strict in such matters. This time, the party finalised the name without telling me. Pankaj has been in the party as a grassroots worker.

How do you seen the SP-Congress alliance?

Is it a gathbandhan (alliance) or a thugbandhan (pact between conmen) to plunder the state?

How do you rate Akhilesh Yadav’s performance?
He’s toured the state extensively and discovered that his government has collapsed and no development work has been done in five years.