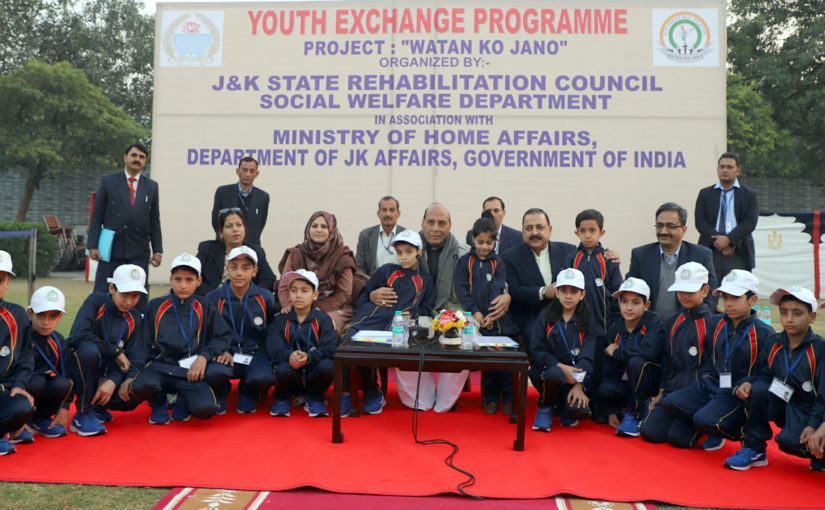 The Union Home Minister Shri Rajnath Singh met a group of school children from Jammu and Kashmir under the Youth Exchange Programme “Watan ko Jano”, here today. The Ministry of Home Affairs (MHA) has been organising programme “Watan ko Jano” to give exposure to the youth and children of J&K about the cultural and socioeconomic development taking place in other parts of the country. Youth and children hit by militancy and from weaker sections of the society have been identified for the purpose. Organized by the Department of J&K Affairs, MHA in association with J&K State Rehabilitation Council, Social Welfare Department, the group of 244 students from Classes 1 to 12, including 46 girls, representing all 22 districts of the state, and escorted by 23 teachers, are on a 10-day visit to Delhi and Lucknow.

Had a wonderful interaction with young students from Jammu and Kashmir who were in New Delhi under the youth exchange programme named ‘Watan Ko Jaano’. pic.twitter.com/Lu5aLsVXrC

Addressing the children, Shri Rajnath Singh said India is a unique country where people of all major religions of the world live in harmony. There is no other such tolerant society anywhere, he noted. The Union Home Minister said all sects of Islam are present in India, something not even any Islamic nation can boast of.

Shri Rajnath Singh said India is a rising power and in last four years our economy jumped from 9th place to 6th; next fiscal we will break into Top Five and by 2030 we hope to be among world’s Top Three economies.
The Minister of State for Development of North Eastern Region (I/C), Prime Minister’s Office, Personnel, Public Grievances & Pensions, Atomic Energy and Space, Dr Jitendra Singh was also present on the occasion.