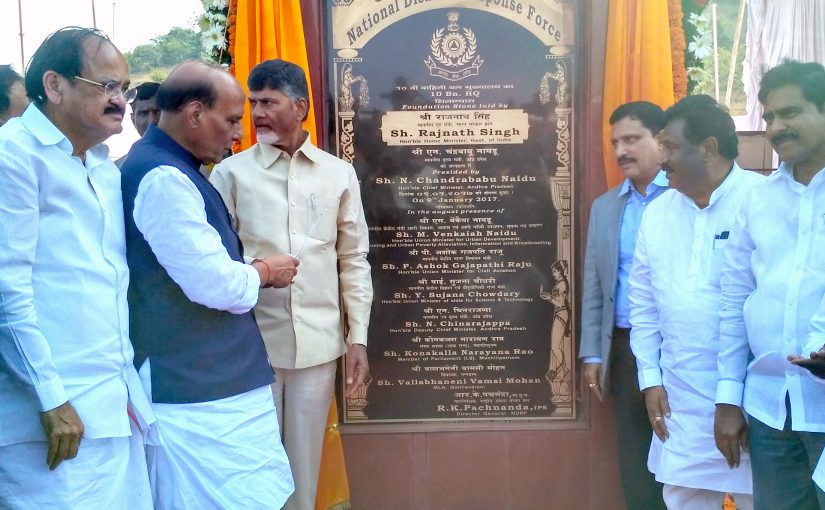 This campus will come up in 50 acres land provided by the Andhra Pradesh Government and the expenditure for construction will be borne by the Central government. The campus will be completed in two years. 10th Battalion of NDRF is responsible for looking after the areas of Andhra Pradesh, Telangana and Karnataka for disaster response.

On this occasion Shri Rajnath Singh applauded the NDRF for combating disasters within the country and beyond and asserted to modernization of Force. He appreciated NDRF for gaining the confidence of people of India in a short span of 10 years. Shri Rajnath Singh said the NDRF today has competence to handle radiological, nuclear and biological disasters. The efforts of NDRF have been appreciated not only in India but also in countries like Nepal and Japan where it has provided disaster relief. Recalling a conversation with the Mayor of a Japanese city, the Union Home Minister said that the mayor was particularly impressed by the way in which NDRF teams have not only rescued the survivors but also recovered the dead bodies of victims with full dignity which no other rescue agency could have probably done.

Appreciating NDRF for being effective, efficient and responsive Shri Rajnath Singh said that people of India want more NDRF Centres and the MHA is working on it. He said that the personnel of this unique Force will be provided with world class accommodation and thanked the Government of Andhra Pradesh for providing land to NDRF.

Earlier Shri. M. Venkaiah Naidu in his speech said that the Union Government is fully aware of needs of people while fighting disasters whether natural or manmade. The government has increased compensation for loss of life from Rs. 1.2 lakhs to Rs. 4 lakhs and the parameter of 50% crop loss for considering in giving relief has been reduced to 33% crop loss.

Shri N. Chandra Babu Naidu also appreciated the NDRF for its prompt and effective response during disasters specially Hudhud and Wardha cyclones. He announced that the new NDRF campus will be connected to Vijayawada bypass (4KM) with a metal road very soon and water supply for the campus will be provided form Pollavaram canal. He also requested the Union Home Minister to speed up the implementation of the provisions of Andhra Pradesh Reorganisation Act.